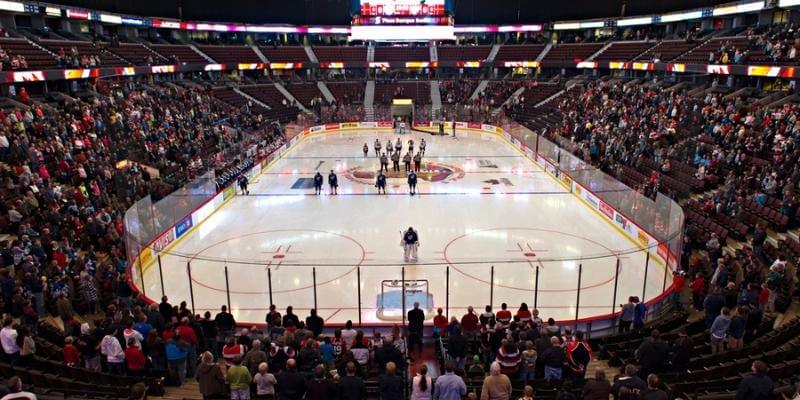 I have been to many hockey games in my life and one of the biggest mistakes I see is people not dressed for the event or location. They feel that since the game is indoors, it will be as warm as any other indoor event, but this isn’t exactly the truth.

Due to the ice, and it need not melt during the game, a hockey arena is kept at moderate to cool temperatures. As a result, wearing shorts and/or a tank top generally isn’t a good idea if you want to be comfortable. But just how cold is it at a hockey game? Keep reading to find out.

How Cold is a Hockey Game?

While going to a hockey game can be cold, it’s not freezing. The ambient air temperature at most games is around 50 to 60 degrees Fahrenheit (10-15 degrees Celsius), so it certainly isn’t a temperature where you should be getting too chilly in the few hours you are there.

As a result, if you are sitting by the ice, only a few rows up, you will be experiencing a lot more cold than someone who is sitting up a little higher in the arena.

Things That Impact the Temperature at a Hockey Game

While those are the averages when it comes to temperature, the truth is that it can vary wildly from game to game. Various factors influence how warm or cold a hockey arena will be during a game.

As I mentioned earlier, where you sit in a rink can have a big impact on how warm or cool you are in your seat. Those sitting at the ice will feel much colder than those up in the nosebleeds. So always know where in the arena your game tickets are for and where you’ll be sitting.

Also, how many people are in the rink can impact how warm or cool it feels. If more people are attending the game, their collective body heat will help the space feel a little less cold.

Another thing that may impact the temperature is the heating system used in the rink and how effective it is. For example, a small rink for a semi-pro or junior team is likely to feature a less robust heating system than a state-of-the-art NHL arena will.

While most hockey games take place indoors, if you go to a Winter Classic game or another outdoor game, expect the temperatures to be much colder.

What You Should Wear to a Hockey Game

The best way to ensure you are always comfortable and never cold when going to a hockey game is to ensure you are dressed correctly. Everyone has their own comfortability with the cold, but most people should at least be wearing socks, pants, and a hoodie or light jacket.

Some people may get away with a t-shirt, or may even prefer a heavier jacket. Whatever is comfortable to you is a good option. Also, I always recommend that people dress in layers when going to a hockey game. This allows you to take off or put on layers if you are uncomfortable.

Feel free to also wear things like a toque, a jersey, and even some gloves to keep you a little bit warmer. You are there as a fan first and foremost, so don’t hesitate to show off your team pride, too!

But if the game you are going to is outdoors, you will want heavy winter gear to keep you warm in what will surely be sub-zero temperatures. This will include gloves, a scarf, something to cover your ears, and multiple layers.

I hope this guide has been able to help you learn how cold it is at a hockey game, and how to best dress for the occasion. If there is any information or guidance you feel I left out, be sure to let me know about it in a comment below.