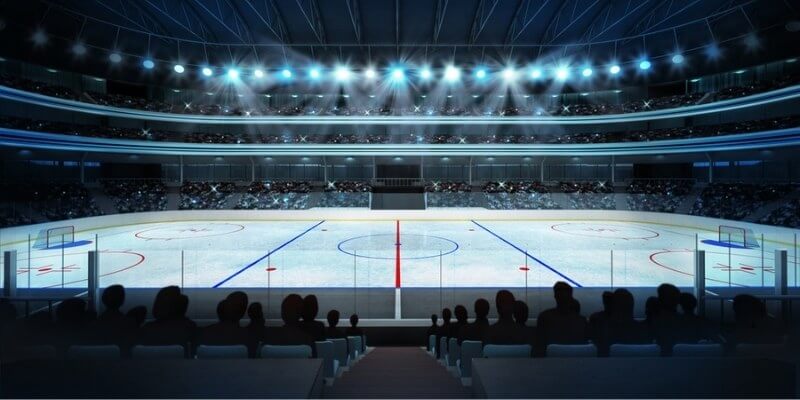 While watching hockey on TV is great, there is nothing better than going to see a game in person. The action is incredible, the food is great, and being in a sea of fans is something that can’t be described.

Arguably the most important thing to think about when going to a game is to decide where to sit. There are thousands of different seats throughout an NHL arena, but which are the best for you? Well, the answer is that it depends.

It depends on what you want out of the experience, your budget, the type of view you want, and what part of the game is most important to you. To help you choose the best, this guide is going to look at the various great places to sit and go over what makes them special.

1. Up Against The Glass

If you want to be as close to the action as possible, there is nothing like being seated up against the glass. It is far and away the most exciting place to be, as the action is taking place only inches from where you sit.

You will be a bigger part of every goal, every big hit, and will get an up-close view of all of your favorite players. Who knows, you may even be able to get a puck as a souvenir during warm-up and interact with the players before or during the game.

You are surrounded by the energy of the whole arena when you sit up against the glass, and it is truly something you need to be able to experience to understand. The boards in front of you also make a simple and easy place to keep your food or drink.

The downside of these seats is that the views aren’t great. While you can see right in front of you well, you will struggle to see the action on the other side of the rink. Another potential drawback is that these seats are normally very expensive, as the experience is desirable.

While some swear against these seats, sitting behind the net can be a great choice. Sitting here helps you see the ice as the players see it, and can really help you follow the game better. Seeing and tracking the puck from the side can be hard, but it is generally easier straight-on.

You also get to see exactly what the goalie sees coming at him, as well. You see things develop as the players move along the ice. You get to see the different shooting and passing angles and see the true movement of the puck.

It gives you a full view of the ice and everything from how plays develop, line changes, battles in the corner and so much more. If you have a favorite team, be sure to consider choosing the side of the rink that they will be shooting twice on.

The costs of these seats are generally affordable, but can certainly get a little pricier as you get closer to the glass. Unfortunately, while you will have a perfect view of one side, you won’t be able to see or appreciate much that is going on at the other end of the rink.

For some people, the luxury box is simply the best option. While you are far away from the action, you are generally much more comfortable, often have food, beverage, and bathrooms nearby, and don’t need to deal with people being all around you.

It is a very comfortable, quiet, and enjoyable place to watch the game if that’s what you’re after. These seating areas are often reserved or rented by businesses or wealthy individuals, but every stadium/arena has different rules and costs for these premium seats.

Of course, the biggest drawback of these luxury seats is the cost, as they are often pricey. Also, you will feel a little more separated from the action when compared to seats in the sea of fans.

Some arenas may also have lower-level club seating, which may give fans access to better and comfier seats, and less busy concession areas and bathrooms. These often provide a blend of luxury, a good view, while also being closer to the action than luxury boxes.

4. A Few Rows Up in The Lower Bowl

If you want to be a part of the action, but still be given a good view of the ice, a seat a few rows up the lower bowl can be a good compromise. Few seats will allow you to easily see and follow the action as well as these.

It isn’t too far that you can’t see the puck, but also isn’t close enough to force you to strain to see across the ice. You get all the energy of being close, without having to sacrifice being able to see your favorite players score a dynamite goal or lay a big hit at the other end of the ice.

Because the lower bowl (like the upper) will wrap around the entire arena, you have a lot of choices when it comes to where you want to sit. You could favor one side in particular, or sit right at center ice and get a nice view of the entire length of the ice without obstruction.

There are really no drawbacks to these seats, as they are a good balance for most people. They can be a little expensive in some cases, but generally less than seats against the glass and club seating.

5. Front of The Upper Bowl

If you value a good view of the entire rink over everything else, the best seats for you will likely be near the front of the upper bowl. You are high enough that you won’t need to torque your head from side to side to keep track of the puck and the gameplay.

Also, not having many people (or anyone) in front of you can be brilliant and ensure no one standing up or moving in and out of the aisle will get in your way. This is also the view that most games show on TV, so you are likely familiar with how your view will look.

Upper bowl seats are generally affordable, so this is a good budget option that still gives you a view you will be happy with. Again, like with the lower bowl, you are free to choose either center ice or with a preference to one side.

You may not feel quite as involved in the action as being closer to the ice, but that isn’t always important to a hockey fan. This is especially true for those who have been to several games and have already got to experience a game in the lower bowl or in front of the glass.

6. Way Back In The Upper Level

While not as popular, and many actually steer clear of these seats, some may prefer being high up in the nosebleeds. These seats make it easy to see everything, no matter where around the arena you are.

The cost of these tickets is another reason why many consider them to be the best. These seats get you into the arena at a much lower price than other options, which can help you save, or give you more to spend on food, drinks, or even additional games in the future.

Of course, be wary of things like poles or other objects getting in the way as you are quite high up. Also, you will hardly be able to make out which player is doing what, as you will be too far to see the game as detailed as you were able to up close.

As you can see, the best seats for a hockey game depend on your preferences/reason for attending. Most seats within an arena are the favorite of somebody, so you need to decide what you want out of the experience. Let us know in a comment which seats are your favorite!