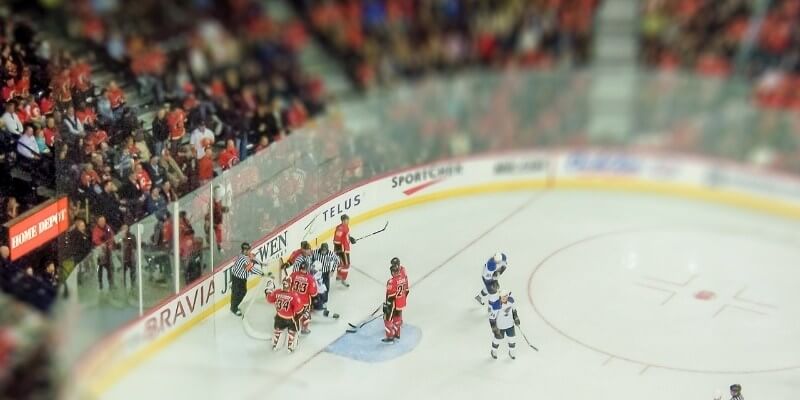 Generally, the best time to buy hockey tickets for the best price is right before the game. If you’re not comfortable waiting, the next best time is to buy your tickets well in advance.

Keep reading to learn about why these are the best times and other ways to save on tickets.

Why Are These The Best Times?

So why are these two times generally the best for buying tickets? The main reason is that these are when the tickets are at their cheapest, which gets you into the game for a much lower cost.

The reason that buying right before puck drop is so cheap is because people are running out of time to sell their tickets, and are starting to panic. Many will sell tickets for below face value right before a game, as it’s better than nothing and gives them something as opposed to nothing.

Whether people can’t make the game anymore, or they have been trying to sell the ticket for weeks, they are likely getting desperate and will part with the tickets for much less than they would have originally wanted.

If you try to buy a week or two before the game, they are not panicked and are not likely to offer up the tickets for cheaper yet. If you don’t want to wait until game day, buying tickets a few days before can often provide lower prices, as well.

But some people aren’t comfortable waiting until the last minute and may want to know weeks or even months ahead of time. For these people, you generally will want to pick up tickets as early as possible into the season.

If you buy in the off-season or early in the year (when the hype around hockey is lower) the tickets can often be cheaper. Playoff races and a greater interest in the NHL often come about later in the year that can drive up prices.

Plus, buying in the offseason often means buying directly from the box office for face value, which is generally cheaper than you’ll find on third-party sales sites. It may be tough to get tickets this way, but if you can, you won’t be paying an inflated amount in most cases.

Other Ways to Save When Buying Tickets

However, shopping at the right time isn’t the only way to save on hockey tickets. There are many other well-known tips out there to save more, and I’m going to go over a few of them here to help you spend less on tickets to the big game.

Buy from The Right Place

The place you buy your tickets from can play a big role in how much you pay. Different services may have tickets for different prices. In particular, be sure to look at the fees they will charge. Many providers may charge exorbitant fees, and you certainly don’t want to get stuff with that.

Always read the fine print, and know exactly what you are responsible for paying before completing a transaction.

Also, you need to ensure they are legitimate. Many sites and/or individuals may try to scam fans out of their money, and many can look quite legit and trustworthy. A simple Google search should show you the popular and trustworthy ticket exchanges to consider.

Another great way to save on hockey tickets is to simply choose the right game to go to. Different games can have vastly different prices. For example, a Canucks game against the Panthers is likely going to be much cheaper than a game against the Maple Leafs.

This can often depend on either how popular the visiting team is, how good they are, or if there is a rivalry there. The opponent of any NHL can have a huge impact on ticket prices. Also, games that are played on weekdays are often more affordable to go to than weekend games.

This is because many people don’t want to have a big night out at the game the night before they have to get up for work.

Take Time to Decide Where to Sit

Taking time to choose the right place to sit can also help you save more money when buying hockey tickets. Seats down by the glass can often be much more expensive than seats in the upper bowl. Be sure to consider the views, and well as the overall experience you want to have.

If you only go to one game every once in a while, it’s generally just fine to splurge on great seats, But if you go frequently, it might make sense to buy slightly more affordable seats, to keep your overall costs relatively low.

I hope that this guide has been able to help you learn when the best times to buy tickets are, and how you can save money when doing so.

Do you have any other helpful tips for saving money when buying hockey tickets? If so, let me know in a comment below!