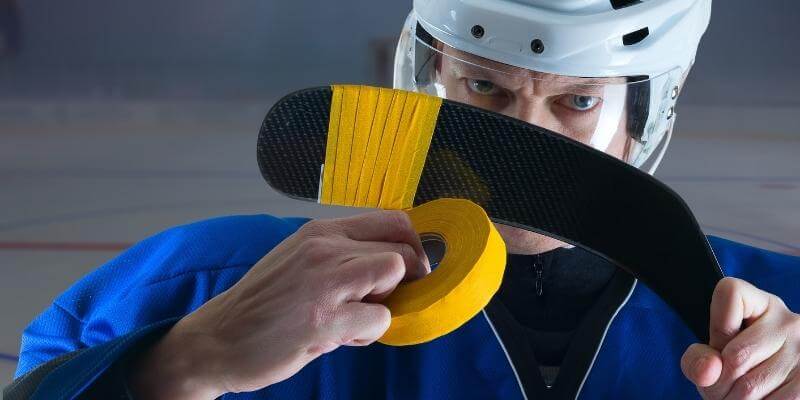 A hockey stick is perhaps the most crucial piece of equipment in the sport. Without it, players would be unable to shoot, pass, or even play defense. But in addition to the stick itself, hockey tape plays an important role.

If you have ever watched or played hockey, you know that most players add some tape to their stick. It is almost always found on hockey stick blades, but also near the knob of the stick.

If you are curious about why players tape their sticks and what it accomplishes, you’ve come to the right place. I’m going to cover the many reasons why players add tape to their sticks, and why it is so important.

Reason 1: Prevent Damage to the Stick

One of the primary reasons why a player will tape their stick blade is to prevent damage to the stick. Stick blades go through a lot as they regularly shoot, pass, and receive the hard puck that is traveling at high speeds.

Stick blades can easily crack and once they do, their performance will be limited and you will need a replacement. Adding tape to the blade protects the stick from taking as much direct damage.

This extends the life of the stick and ensures you don’t have to buy a new one every couple of games. Also, tape on a stick can act as a moisture repellent. If moisture gets onto certain stick materials (such as wood) it can warp it and can make the stick hard to play with.

Many composite sticks are fairly slippery, and it is common for players to lose their grip during a game. To combat this, people will add some tape to the shaft and knob of the stick. This tape gives players something to grip and grab onto more securely.

A better grip on the stick makes it far easier to keep a hold of your stick and be precise with your movement and dekes. Many players will also add ribs to the knob tape job, too. This can add even more grip and make it less likely that the stick will ever slip out of a player’s hands.

Having tape on the blade of the stick also allows for a better “puck feel” and more control. When you receive a pass, a slippery composite blade can lead to the puck slipping off your blade, or not being in the place you need or want it to be.

This keeps your shots and passes more accurate, and allows you to better keep the puck in one place while stickhandling and deking. This tape also provides a better cushion for receiving passes and assists in providing better direction for the puck as it leaves your stick.

Reason 4: Pick Up the Stick Easier

During play, it is common for a player to drop their stick from time to time. This could be after it got slashed, after they dove for a loose puck, or even if it simply got knocked out of their hand. This leaves them unable to do much of anything on the ice until they pick the stick up.

But if you have ever tried to pick up a plain and un-taped hockey stick off the ground, it is not an easy task. It normally lays quite flat on the ice, and with the slipperiness of the composite material, it can take a while and some effort to retrieve it.

With some tape around the knob, it will allow for some separation between your stick and the ice, making it infinitely easier to pick up on the fly and get back into the game.

As you can see, there are several reasons for players wrapping tape on their sticks. While players can play without the tape, it certainly makes things a lot easier and will improve your skills on the ice.

Is there something else you think I should have mentioned in this guide about why players tape their sticks? If so, I’d love to hear about it in a comment below.