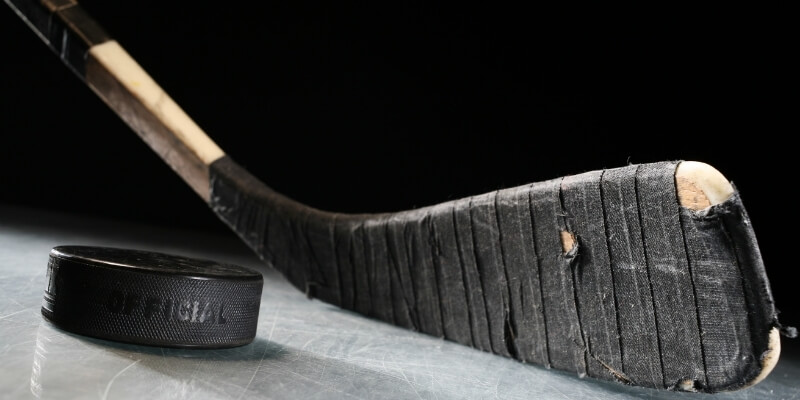 If you look at the hockey sticks of different players in the NHL, each will look unique. They come in different sizes, will have different flex ratings and will be different colors, and even be made by different manufacturers.

However, one thing that almost all hockey players have is tape on their sticks. The tape may differ from one stick to another, but it will almost always be there. There are many benefits to taping your stick, but many rely on you taping the stick correctly.

While it might seem easy, this isn’t always the case. To help you out, this guide is going to go through how to tape a hockey stick, as well as mention the benefits of doing so for your performance on the ice.

The Process for Taping a Hockey Stick

When taping a hockey stick, there are three main areas that players will tape, which are the blade, the shaft, and the butt end of the stick. To simplify things, we’re going to look at each tape job independently of the others.

Taping the blade can be done by simply taping the stick, from heel to toe or toe to heel. Each player has their favorite method, but either should be fine. Make sure the taping is smooth, keep the spacing consistent and there doesn’t need to be a ton of overlap, either.

To make this easier, most players will hold their stick up (with the butt end on the ground and use one hand to support the stick, and the other to apply the tape. You should leave about an inch or two of stick at the end of the blade in most cases.

But some players may only tape the toe of the stick, or in the middle, but taping the whole blade (from heel to toe) is generally the best choice.

Be sure to finish the tape job by rubbing a hockey puck on the recently-taped blade to ensure that it is taped well and fully adhered to the stick, without any ripples. These ripples and wrinkles in the tape can lead to unpredictable puck bounces and movement.

When you decide to tape the shaft, it often involves starting near the butt of the stick, and then wrapping tape around the stick, leaving gaps of around an inch or two in between. Taping the shaft of your stick isn’t nearly as common but those who want some extra grip can do it.

Taping the butt end of your stick is about as common as taping the blade, and most players will do it. This is done by first adding several layers of tape around the end of the stick, making a little bump, or knob.

Once you have this knob to prevent the stick from sliding out of your hands, tape a little down the shaft in a similar manner to the blade. A slight overlap, and making sure the tape job is smoothed out afterward.

Some players might even roll up some tape to create small ridges and waves under the tape job, to add better grip and make it easier to maintain a strong hold of your stick during play.

Why Do Players Tape Their Sticks?

So now that you know how to tape all of the different areas of your hockey stick, why do players do it? Well, there are many different benefits. First and foremost, taping the stick provides a better puck feel, and gives a player more control to improve how effective they can be on the ice.

This helps them stickhandle better, make more accurate passes and shots, and even receive passes better and in a much smoother manner. Tape can also help a player maintain a better grip of the stick, depending on where the tape is and if any ridges have been added.

Another reason that players add tape to their sticks is for protection. Hockey sticks go through a lot of wear and tear, but using some quality tap can lessen this. Instead of your stick hitting the puck dozens of times a game, the tape will take the brunt of the impact.

Chipping and breaking are common, even in modern composite sticks, and tape help keeps the stick together and vastly increases its longevity. Also, the moisture from the ice and snow of a hockey rink isn’t great for sticks, and this tape can protect them from moisture.

How to Choose Hockey Tape

In order to tape your stick, you need to pick up some hockey tape. There are hundreds of different rolls of hockey tape out there for sale. Cloth hockey tape is one of the best and most popular, but the key is to find one that unrolls easily and is sturdy, without being bulky.

If it is too thin, it won’t stand up well to continued use over time and can be prone to ripping and tearing. It also won’t provide much moisture protection, either. But if it is too bulky, it can make the sticky heavy or difficult to use.

White and black are the two most common choices, but there exist many other colors you can choose from, as well. Many people swear by black tape as it can disguise the puck on your blade a little, as opposed to a white blade.

However, black stick tape up on the butt end of the stick can often leave a dark residue on your gloves, so white is often a popular choice. White tape on the blade is also preferred by younger players as it can make it easier to learn stickhandling as they can see the puck more easily.

It is also a good idea to apply some stick wax to your tape, as well. This allows for more moisture protection and also helps your stick to better grip the puck. Stick wax is affordable, easy to apply, and often smells incredible, as well.

Over time, your hockey tape will deteriorate and tear from constantly shooting the puck, passing it, receiving passes, and from the snow and moisture, it encounters. It will become less effective, and also look terrible at the same time.

As a result, there will come a time where you need to remove your old and torn tape to apply new tape. The process for removing hockey tape is generally quite easy. Simply remove the tape either by grabbing a loose part, or cutting it.

In most cases, there will be some extra residue left over on the stick, and you will want to remove this before you apply new tape. Sometimes, this residue can be rubbed or with your fingers or a cloth, but a scrubber may also be required. Heat can also do the trick.

How often you replace your tape depends on personal preference and how well your previous tape job was. Some players may tape up their sticks before every game, while others may go weeks between each new tape job.

Taping your stick can be a great way to maintain better control of the puck and better protect your stick from use. I hope this guide not only helped you tape your stick but if there’s anything I missed, don’t hesitate to let me know in the comments below.