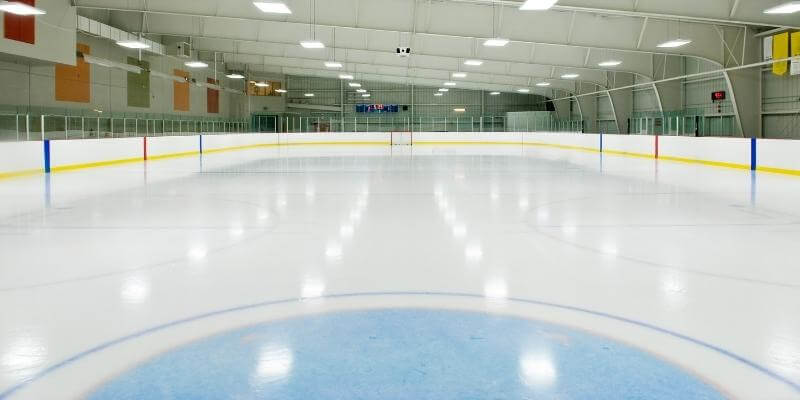 Perhaps the coolest and most interesting thing about hockey is that it is played on a huge ice rink. This allows for the game to be incredibly fast, and keep a pace that no other team sport can match.

You may have seen a lot of games on TV and even been to some in person, but it can be hard to judge just how big the actual rink is. Players move up and down it with such speed, it can often make the rink appear smaller than it actually is.

But just how long is an NHL rink? If that is a question you’ve had, you’re in the right place. I’m going to go over the size of not only rinks in the NHL, but rinks all over the world.

This provides players with a ton of space to play, and is the perfect size to keep the game exciting, without it being too cramped.

The goals are 11 feet from the end boards, and the blue lines sit 75 feet from them. In addition to the NHL, other hockey leagues in North America also use the same dimensions for their rinks, to keep things as consistent as possible.

While there have been lots of changes to hockey since it was first played well over a century ago, one thing that hasn’t changed is that the rink size has remained around the same. The very first organized game of hockey took place on a rink that was 204 feet long and 80 feet wide.

This took place on Victoria Skating Rink, way back in 1875, but the rink was constructed much earlier in 1862. Since then, rinks have hardly changed at all in terms of size and shape in North America.

While all NHL rinks are the same size, they may not always play or look the same. The size and style of the boards, the colors of the seat, the decals on the ice, and even the lighting patterns can differ from rink to rink and make for a different experience.

While those are the dimensions for the rinks in NHL and other rinks in North America, that doesn’t mean they are the standard everywhere.

As you can see, these rinks are very similar in terms of length, but are much wider. These are the sizes used in international competitions like the IIHF World Championship and the Olympics.

Along with looking different, this international ice brings some differences to how the game is played. Games are played much more wide-open, and the pace slows, and the possession of the puck is often much more crucial to the outcome of the game.

Outdoor, Youth and Other Rinks

These are the official and most common sizes for hockey rinks but are far from the only sizes you will see. There are plenty of smaller rinks out there for youth players, for teams to practice on, or for beer leagues to play on.

While many youth teams will play on a larger rink and just use a portion of the ice, others may play on smaller rinks made specifically for recreational hockey, skating, and other sports or events.

Also, outdoor rinks will come in all different shapes and sizes. Their size will often depend on the space available, as not every plot of land will have enough space for a regulation-sized rink. They do exist, but many will be a bit shorter and less wide.

I hope that this guide has helped you learn a little more about the size of hockey rinks all over the world. If there are some things that you feel I should have mentioned, feel free to let me know in the comments below!