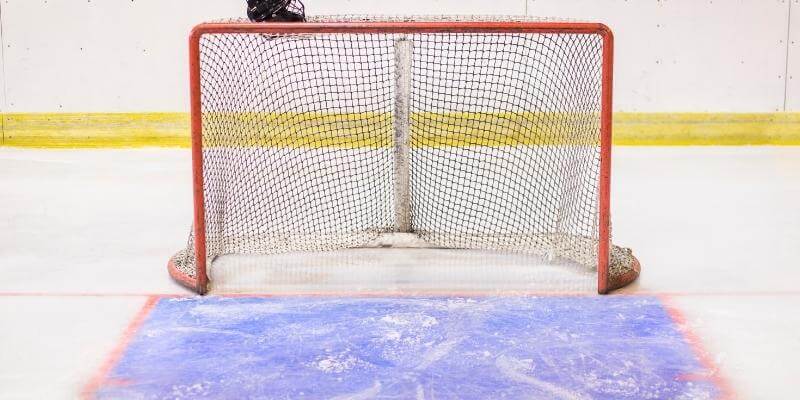 The goal (or net) on each end of a hockey rink is one of the most important parts of the game. The entire point of the game is for each team to try and put as many pucks as possible in the backs of those goals before the final whistle is blown.

While these are each guarded by a goaltender in large pads, there are still an average of around six goals per game being scored. These goals are big enough to allow teams to score, but not too big that it allows teams to score dozens of times every game (like in lacrosse).

But just how large are these hockey goals? It can be hard to make out how large they are when watching a game on TV, and even sitting high up in the arena can make it difficult to get a good idea. Well if that’s a question you’ve long had in your mind, I’m here to help.

Keep reading to learn not only what the dimensions of a hockey goal are, but learn much more about these goals themselves.

What is the Size of a Regulation Hockey Goal?

The dimensions of a regulation-sized NHL goal are 72 inches wide (6 feet), 48 inches tall (4 feet), and 40 inches deep (A little over 3 feet). These are the goals that are used in the NHL, AHL, and many other leagues all over the world.

This size allows a goalie to take up a lot of the net, but also not make it impossible for players to score. All goalies are taller than the net, so it is the width of the net that makes some shots difficult to stop.

These regulation goals are made of reinforced steel posts and crossbars, and a net that is used to catch the pucks after they are scored. Because of their solid construction, these nets can often weigh quite a bit and are put into the ice to ensure they don’t move very easily.

Of course, not all goals you will see will be regulation-sized. There are plenty of smaller goals for youth or junior leagues, and they make a variety of different sizes to use for practice or to have in your yard or driveway.

In addition to that, there are several other types of goals for specialty purposes. For example, smaller goals for mini sticks and pond hockey exist and are much smaller, while also looking very different.

The History of Hockey Goals

While the aforementioned dimensions are accurate for all NHL goals today, this wasn’t always the case. Goals throughout the history of the sport have undergone several different changes. During the early days of the sport, the goal was simply created using rocks.

Also, back in the day (because there was no net) the goal could be scored from any angle or direction, as long as it passed through the zone. Then, in the 1890s, two sticks were put into the ground that signified where the goal was.

From there, a crossbar was added for better stability, and the goal was square. Soon after, a net was added to the posts and crossbar to catch the pucks and make them much easier to retrieve quickly.

Sure, goal numbers have been up in recent years, but they are still much lower than they have been in the past. The average team scores about 3 goals per game right now, but during most of the 2000s and 2010s, it was closer to 2.7.

If you go back to the 70s, 80s, and early-90s, this number was closer to 3.5 and even 4 in some cases. Many people would love to see a return to those high-scoring days, and increasing the size of the goal could be one way to accomplish it.

With goalies getting larger than their counterparts in years past, many people feel as if it would make sense to increase the size of the goal as goalies get larger. Of course, no one knows where the size of hockey goals will go in the future, but I wouldn’t be surprised if they get bigger.

I hope that this guide has been able to help you learn not only the dimensions of a regulation ice hockey goal but also a little more about the history and potential future of hockey goals. If you feel like I left something out of this article, don’t hesitate to let me know in a comment.