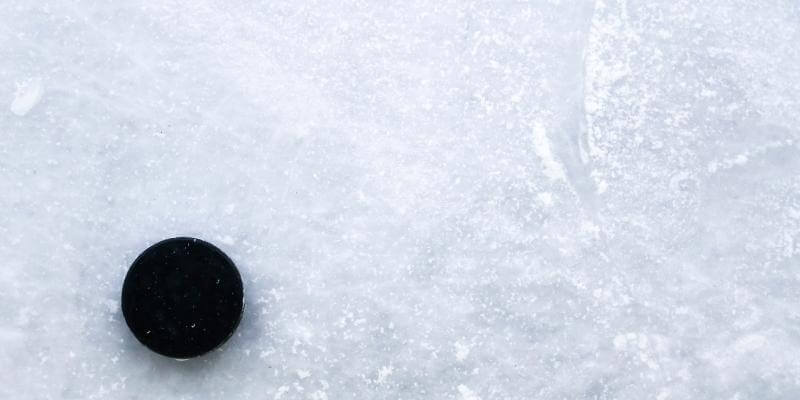 One of the coolest things about hockey is the fact that it’s played on a large sheet of ice. This helps it be an incredibly fast and exciting sport. It is unlike many other sports on the planet as most are played on a court or the grass/turf.

But if you’re like me, when you first got into the sport of hockey, you always wondered just how so many large players can skate around on the ice for an hour or longer and not have it crack or break.

Well, this is because the ice is relatively thick and strong, and is also kept at a temperature that prevents it from melting.

But just how thick is the ice on a standard rink? Keep reading to find out.

How Thick is the Ice in a Hockey Rink?

While you might think the ice in a hockey rink is incredibly thick due to how well a rink holds up to dozens of players skating on it, the ice at a hockey rink is only around ¾ of an inch up to an inch and a half thick. That is actually thinner than the puck that hockey is played with.

The ice is often kept at around 16 degrees Fahrenheit to ensure it is chilled and to prevent it from melting. Having thinner ice is great as it is often faster than thick ice. Having thin ice allows water to freeze faster, and can provide a much harder service that is simply better to play on.

If the ice becomes too thick, it will become more slow and soft, and this simply isn’t great for a fast-paced game like hockey. Despite this thin sheet of ice, hockey crews still need well over 10,000 gallons of water to create a nice sheet of ice to play on.

How is the Ice in a Hockey Rink Made?

So now that you know how thick the ice is, another common question people have is how the ice at the rink is made. While some think you just pour a bunch of water and wait for it to freeze, it is quite a bit more complicated and detailed than that.

Rinks are made by layering the ice. The first super-thin layer is sprayed directly onto cold concrete and can freeze very quickly. Then, layers of ice measuring a tiny fraction of an inch are sprayed onto the ice once the last one has frozen.

Eventually, these layers will be built up to the thickness the ice needs to be at, and then hockey can be played. Also, one of the first couple layers of ice (often the second), is painted white so that fans and players alike can easily distinguish where the puck is at all times.

While some rinks and arenas stay as ice all year as they are only used for hockey, many often need to change for other events or sports to be played. Some will remove the ice and have to recreate it, but this can be timely as the process can take 48 hours.

Instead, many arenas across the world have a special type of flooring that is laid on top of the ice and allows for other sports and events to take place, without ruining or having to remove the ice.

How are the Markings on the Ice Made?

The markings are often painted on a thin layer of ice on the concrete floor, and then the ice is built up to the thickness it requires on top. An additional coating can be applied if need be, as well. This ensures the lines, marks, and logos are secure and won’t rub off or be washed away.

I hope this article has been able to help you not only learn more about the thickness of ice at a hockey rink but also how the ice itself and the markings on it are made.