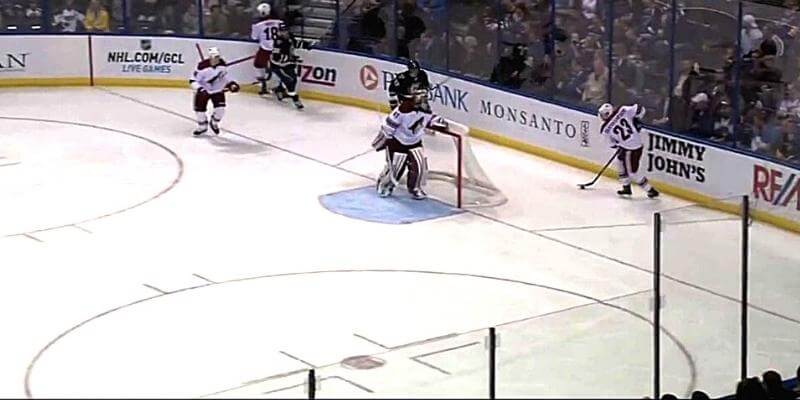 Forechecking in hockey is a defensive strategy in which a team pressures their opponent in the offensive zone in hopes of stealing the puck or flustering them. It is a risky approach, but one that can certainly be successful and turn the tides of a game.

I have been a fan of hockey for multiple decades, and forechecking has long been one of the best defensive strategies for teams who are equipped for it. It can create instant offense, and the pressure can be very hard to deal with.

A team that is good at forechecking is beautiful to watch and you can almost see the frustration on the opponents’ faces. However, forechecking is a large and vast collection of different strategies. Whether you are a player or a fan, it is a good idea to learn about them.

With that in mind, this guide is going to not only cover what is forechecking in hockey but also go through many of the different forechecking strategies that teams will employ to beat their opponents.

What is Forechecking in Hockey?

As mentioned earlier, forechecking is when a team will apply pressure on opponents in their end, and try to force them to make a mistake and turn the puck over. This pressure can disrupt the regular flow of a game, and really challenge a team that isn’t ready for it.

In general, there are a few situations that will call for a forecheck. One will be to recover the puck after a dump in, another is to regain the puck quickly after an offensive turnover, and many teams will also be aggressive on the forecheck after a rebound from a shot attempt.

While this forecheck generally takes place in the offensive zone, more conservative forechecking approaches will take place in the neutral zone, and try to prevent the opponent from moving the puck forward.

Forechecking will often see up to three players putting pressure deep in the opposing end. One player will be designated as the individual to chase the puck or annoy the carrier of the puck, while the others will cut off any passing lanes.

While you now have an idea of what forechecking is, it is a good idea to gain a better sense of the particular strategies teams will use. Similar to formations in soccer or football, there are many set positions that hockey teams will use when forechecking.

This is arguably the most conservative approach and has only a single player (normally a forward) go into the offensive zone to pressure opponents. The other four players will drop back into the neutral zone and play defensively.

This strategy is often known as the neutral zone trap, with many players in the neutral zone, making it hard for opponents to move forward. It is good for protecting a lead and limiting the offensive chances for the opponent.

The 1-2-2 is still conservative, but not as much as the 1-4. The center will chase or force the puck, while the other two forwards will play along the boards, to prevent clearing opportunities and break-up passes. The two defenders will generally play as normal.

This strategy is particularly good for teams with large and physical wingers, as they can control the boards and ensure no players or pucks get by.

The 2-1-2 is a more aggressive approach than either of the other two I have mentioned so far. Two forwards are sent deep into the zone to put pressure on the puck, and the third roams around close by.

The two defenders will generally play alongside the boards, and this strategy can be effective, but also leaves you open defensively. It takes a skillful team to pull this off, and communication between players is incredibly important.

If you need a goal and you need it fast, the 3-2 strategy is likely what you will want to use. It is incredibly aggressive, and if it fails, you will be incredibly vulnerable to the counter-attack. It involves three players pressuring in the zone, with the other two waiting close by.

It is an offensive blitz and is normally a last ditch effort to score, or used at the end of a period where there is no threat of the opponent scoring due to time.

These aren’t the only strategies, and each can be fine-tuned, but they are some of the most common that you will see when watching or playing in a game. But how do teams choose which strategy to employ? Well, it normally depends on a few things.

First of all, each coach has their own thoughts and philosophies about which type of forechecking is the most effective. Some prefer a more conservative approach, while others like the high risk/high reward that an aggressive approach provides.

Next, the abilities and skills of the players on the ice will have an impact. Teams with fast skaters will often go with a more aggressive approach. If a team is very physical and strong, a more conservative approach that utilizes physicality might be preferred.

Also, the game situation may dictate which is used. If a team needs a goal, they are likely to forecheck much more aggressively than a team that is ahead or tied.

As you can see, a forecheck can be an important part of a hockey game and can help a team gain the upper hand on their opponent. If you feel there are some things I should have included in this article but didn’t, don’t hesitate to let me know in a comment below.