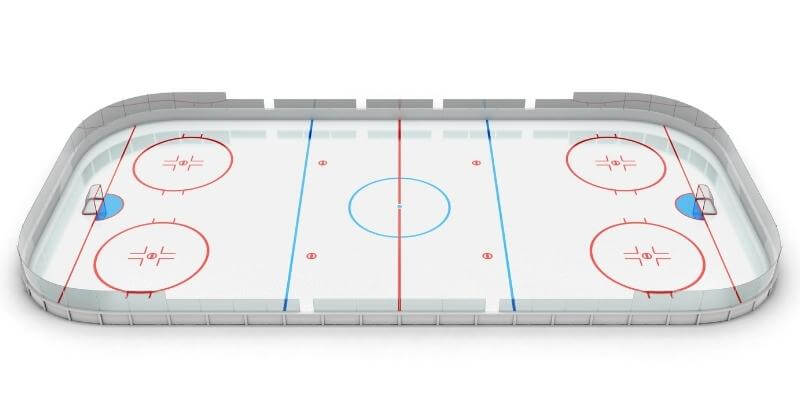 If you have played or watched hockey before, you know the ice is riddled with different lines, circles, and other designated areas. One of the most important is the neutral zone. Despite how important it is, many casual viewers or fans might not know much about the neutral zone.

They may be unaware of what its purpose is, the rules surrounding it, and more. A lot of the game takes place here, so it is important to know about it. With that in mind, this article is going to help you understand what the neutral zone is, what it is used for, and so much more.

What is the Neutral Zone?

The neutral zone is the part of a hockey rink between the two blue lines. It is called this because it isn’t the attacking zone (where your team attempts to score on the opposing goal) or the defensive zone (where you try to stop the opponent from scoring).

It is an area where both teams are neutral and can either be on the attack or play defensively, depending on the situation or circumstances. The zone is 85 feet wide (the width of the ice surface in the NHL) and 50 feet long.

The Importance of the Neutral Zone

While a lot of hockey may look like players are just skating around, there are set plays and pieces that require different players to go to different spots of the ice, and skate in unison with one another.

How a team moves through the neutral zone, both offensively and defensively, is often a part of their set play. Also, the neutral zone presents many opportunities to quickly turn the tides on your opponent.

If a defending team can break up a pass by an aggressive offensive team in the neutral zone and steal the puck, they will often have a good chance at heading the other way and getting a relatively uncontested scoring chance.

While not a lot of time is generally spent in the neutral zone, it is the zone where teams change roles from offensive to defensive and how quickly a team gets back or forward through the neutral zone can often dictate which team has the upper hand in the attacking/defensive zone.

Line changes also take place from the neutral zone, and a bad line change can leave a team vulnerable and outnumbered if they aren’t careful. A lot of big hits and dazzling dekes often take place in the neutral zone as each team jockeys for the upper hand, too.

If you want to learn about the neutral zone and its importance, you need to think about its role in the rules of the game. For example, the offsides call heavily relies on the neutral zone. If a player receives a pass and they are completely over the blue line, play will be stopped.

Another way of saying this is that a player must skate across the blue line with the puck in hand, and it can’t be passed to someone beyond that line. If offsides is called, a faceoff will occur in the neutral zone, close to where the infraction occurred.

The neutral zone also plays a very important role in the two line pass rule, which has since been removed by the NHL and many other leagues. This rule used to prohibit players from making passes that crossed two lines (most often their defensive blue line and the red center line).

This led to many teams spending more time in the neutral zone, as you had to be careful not to make a pass that was too long.

The reason the rule was removed is because the league wanted to generate more goals and offense, and allowing these passes leads to a faster-paced game with more excitement and scoring.

In conclusion, I hope that this article has helped you learn more about the neutral zone in hockey, and its importance. If you feel I left out some important information or have any questions at all, don’t hesitate to leave a comment.