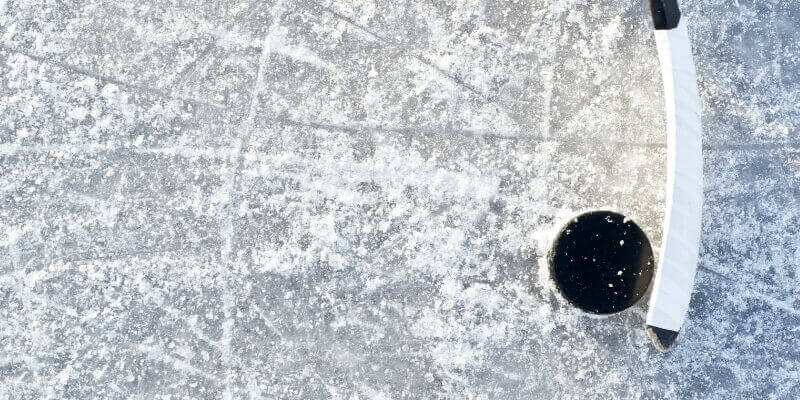 While a lot goes on in a game of hockey, it ultimately comes down to putting the puck in the back of the net. That’s right, the small puck that you can hardly see on a TV broadcast of a game is at the center of this wonderful sport.

Everyone knows what a hockey puck looks like, but what are they made of? While the materials that pucks have been made of have changed over the years, they are currently made of rubber.

Despite being made of rubber, these little pucks can pack a punch, as I have personally felt during games while blocking shots. This is because the rubber is vulcanized to make it harder and stronger.

The History of the Hockey Puck

During the very early days of hockey, a variety of different things were used as pucks. This included wood blocks and rubber balls. In some cases, things like rocks and even frozen cow dung were also reported to have been used from time to time.

The first pucks were made by cutting up rubber balls (either in half or cut the edges off) to stop them from bouncing. This was done back in 1875, and the word puck was first used to describe them a year later in 1876.

Fast forward to the early 1900s and pucks were made by gluing two pieces of flat rubber together. Unfortunately, this often led to the pucks coming apart during the game and leading to a stoppage. Then, in 1940, the modern design of pucks that we currently have was created.

However, it wasn’t until 1990 when the league introduced a league puck that would be standard for the NHL. Regulation-sized ice hockey pucks are 1 inch thick, 3 inches in diameter and often weigh just under 6 ounces.

How Are Hockey Pucks Made?

So how are hockey pucks made? Well, there are a couple of different methods. Souvenir and practice pucks are created differently than the ones that are used in a game. I’ll begin by looking at practice and souvenir pucks.

These are made by slicing rubber tubes, and then dropping the rubber into heated molds and compressing it together. This is a very fast and simple method, and thousands of pucks can be made daily in a single facility.

Making regulation game-ready pucks is a little more intensive. It involves mixing rubber and a bonding material and then placing them into a room-temperature mold to compress them.

Before being thrown onto the ice for use in a game, most pucks are cooled or frozen. One reason for this is to help them slide and glide easier on the ice. The other reason is to reduce the natural bounciness of the rubber.

Have you ever wondered just why it is called a “puck”? To us, it makes sense after well over a century of use, but trying to learn the origins of the term isn’t easy. This is because there isn’t a universally agreed-upon story.

Some believe that it is named after a character named Puck in A Midsummer Night’s Dream, while others think it stems from the sport of hurling and is related to the Gaelic term puc, which is to poke or deliver a blow. While the second option seems likely, we may never know the truth.

While this article has focused on the pucks used for ice hockey in the NHL, those aren’t the only kind of pucks being used. There are also pucks for youth leagues, pucks for training purposes and even pucks designed specifically for street hockey and inline hockey.

Youth league pucks are often lighter than NHL-regulation pucks, as using heavier ones is harder for younger players and those who are inexperienced. Training pucks, on the other hand, are often much heavier.

This is done to allow players to develop strength and better skill bypassing, shooting, and stickhandling with a heavy puck. Street hockey pucks are made of lightweight plastic, or even foam, and are easier to move along the rough terrain of some roads without getting stuck.

Inline hockey pucks are very unique, as well. Because they are designed to be played on concrete and sports courts, they come complete with a few glide pegs to ensure the puck slides smoothly on the surface of the ground.

I hope this guide has been able to help you learn more about what a puck is made of, the process for making them, and the history surrounding ice hockey pucks. Did I miss something that you would have liked to see included? If so, be sure to let me know!