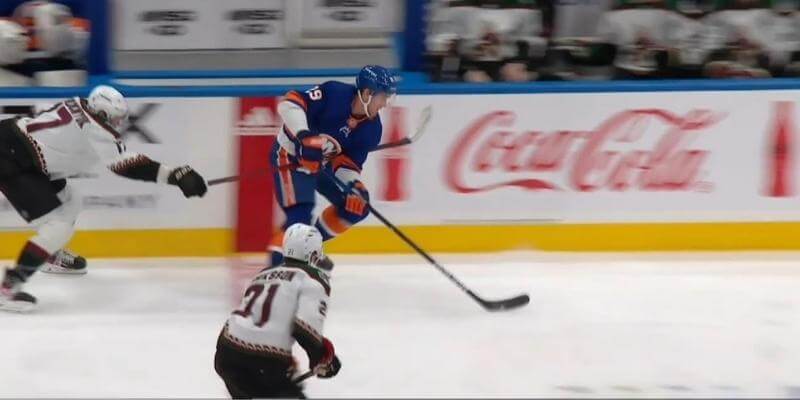 Embellishment in hockey is when a player will exaggerate the impact that a hit or check had on them, in order to get the opponent in trouble. They often do this to get more calls from the ref and have the opponent spend more time in the penalty box.

As a lifelong fan of hockey, I have noticed an uptick of players embellishing in recent years. While I understand the benefit of embellishment, I can’t help but feel that it can ruin the integrity of the game in some situations and scenarios.

Embellishment is still quite rare in the NHL and other hockey leagues, but it is certainly something to know about. With that in mind, this guide is going to take you through the ins and outs of embellishment to help you better understand it.

What is Embellishment in Hockey?

As I touched on briefly in the introduction, a player who is embellishing will often act like a check or hit hurt more than it did by wincing, falling, or throwing their head or body backward in an exaggerated motion. Embellishment is also often called diving.

This is done in order to get the attention of the referee and make the situation look worse than it actually was. If the ref sees a player in dismay, or who appears very hurt, they may be more tempted to call a penalty on the opposing player.

Of course, some refs might notice that the play was embellished, and could call a penalty on the player who was diving, not the one who hit them.

The History of Embellishment

Embellishment and “diving” have been a part of many sports for a long time. While most notable in soccer, it has found its way into other sports over the years. Hockey has traditionally been a very physical sport, and diving was not very prevalent.

However, once teams realized that they are able to get additional power plays by exaggerating hits, trips, and other infractions, embellishment became more common. Many fans, teams, and players alike are not a fan of embellishment and feel it ruins the game.

While it is not a major problem yet, I wouldn’t be surprised to see teams continue to embellish, especially if it gets them more/longer power plays to help their team win. It is yet to be seen what will come of embellishment in hockey, but hopefully it doesn’t get worse.

What is the Penalty for Embellishment?

If a player is caught embellishing a hit by a ref, they can be given a minor penalty, which is two minutes long. However, in addition to a penalty, many players will get fined after the game by the league if the embellishment was noticed.

With each embellishment a player is caught for, the fine will get more expensive, to discourage repeat offending amongst players. Right now, penalties and fines are relatively rare in the NHL.

Penalties are especially hard as the game moves at such a fast pace, that it is hard to see whether a play is actually an illegal one, or if the player fell and/or tripped on their own.

A good resolution to the lack of penalties called for embellishment could be an automatic review system for close calls. A simple quick look at a play in slow motion can often show if it was embellishment or not, and wouldn’t slow down the game very much.

Also, if it begins to happen more often and becomes more obvious, don’t be surprised to see more and more penalties and fines handed out to those involved.

I hope that this guide has been able to help you learn a little more about embellishment, and the role it plays in hockey. If you feel I missed including or mentioning something, don’t hesitate to let me know in a comment below!