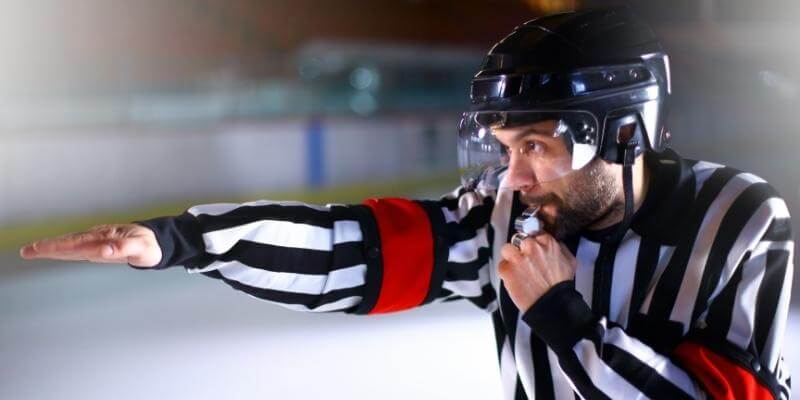 Hockey referees are among the most important parts of most games. They keep the peace and ensure every player is playing within the rules of the game. This keeps players safer and ensures the games are played with integrity. Without refs, hockey would look much different.

While their job is often glossed over and forgotten about in the grand scheme of things, they had to undergo a lot of education and training to get where they are today. And for their hard work and dedication to the game, many are paid quite handsomely.

But just how much will a ref make for maintaining the order during a game? Keep reading to learn about how much you can expect to make if you are a hockey referee.

It Depends on the League

When it comes to how much hockey refs make, it often depends on where exactly they are working.

If a ref is working in a non-pro league such as minor hockey, midget, bantam, or other smaller leagues, refs are often paid anywhere from $0 to $150 a game.

Many of these refs are paid per game, and this likely isn’t their full-time job, just something they do for fun and a bit of extra money. The exact amount varies, with many taking home around $75 or less per game they work.

It Depends on Your Specific Job and Duties

Another thing that impacts how much a ref will make is their job and duties on the ice. As mentioned, actual referees will make hundreds of thousands of dollars a year.

While the two are often confused, a linesman is responsible for making calls like offsides and icing, and is also who step in to break up fights and other rough stuff. It is ultimately the referee that is the one who calls penalties, talks to the coaches and is in charge of the game.

Either way, both are very high-pressure and stressful jobs that require a ton of knowledge, a strong level of physical fitness and an incredible sense of the game. In fact, many refs are former players themselves.

Now that you see how much hockey refs can make, there is a chance you’re interested in the field yourself. The process of becoming an NHL ref can be a long one, that takes years until you reach the pros, if you ever do.

Most refs work in smaller leagues and build up their skills, knowledge, and name before eventually getting a crack at the big leagues. You need to remain dedicated for years and show you can call a great hockey game.

You want to let players play, but ensure that the game doesn’t get out of hand. You need to know the game well and be able to make fair and unbiased calls quickly. Also, many refs will be ex-players in some capacity and will be lifelong fans of the game, too.

In addition to proving their knowledge of the game and working up the ranks, these refs also regularly have training camps and fitness tests to ensure they are up to the task of keeping up with hockey players on the ice.

The game is very fast-paced, and out of shape referees simply wouldn’t be able to keep up and be in the right spots during gameplay.

As you can see, most hockey refs in the NHL and other professional leagues can make a pretty penny. While their salaries are tiny compared to players, they make much more than the average person does.

If you have any more questions about how much hockey refs make, or how you can become one, be sure to leave me a comment or question down below.