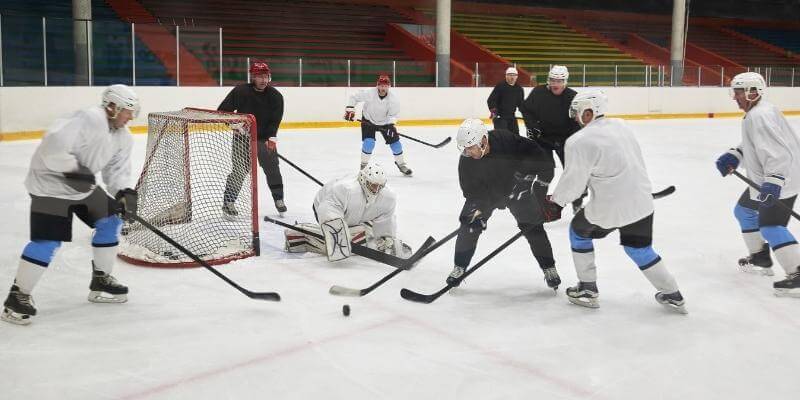 When many people think about hockey, they think about goals and the players who score them. However, just as important as scoring the puck is stopping the other team from putting the puck in the back of the net.

Playing defense isn’t easy, but there are a few universal tips that defenders can keep in mind to make sure they are always playing their best. Read on to learn a few helpful pieces of information on how to play defense in hockey.

When it comes to defending in hockey, arguably the most important thing is to know your responsibilities. Of course, your main responsibility is to help your team stop the opponent from scoring the puck. You do this by playing physically and ensuring you’re always in the right place.

You want to keep yourself between the offensive puck carrier and the goal, and never turn your back on the puck. Try to make the offensive player’s life miserable by using your stick to poke at the puck, and your body to push them off of the puck.

Some other responsibilities that defenders have are to battle in the corners, keep the front of the net clear, start offensive rushes with an outlet pass, and more. The better you know what you are supposed to do, the easier it will be to work on those responsibilities.

Know the Skills to Work on

Another key part of being a great defender on the ice is to know the skills you need to succeed. As a defenseman, one of the most important things is being able to be a good skater, especially backwards.

You need to be able to keep up with some incredibly fast players and be comfortable switching from backwards to forwards skating in an instant. If you can’t contain faster offensive players, you will struggle to find success playing defense.

This is especially true during one on ones, as it can be hard to stick with a fast and agile offensive player, so you need to ensure you work on your skating skills as much as anything else. Be sure to check out this video for some great 1 on 1 defensive tips:

You will also need to be a good passer, as it is often the defenders that start most offensive rushes for a team. Your passes should be accurate, but also hard enough that they reach their destination without being interrupted or intercepted.

As a defender, you should be well adept at blocking shots and have the stick skills needed to poke check the puck away from opponents, without tripping or hooking them. Working on making clean body checks is another thing you should work on, too.

Without knowing the skills you need to use, you may struggle to know which ones to focus on and improve. If you prefer to learn visually, check out the below video on some of the basics that every defender should look to master.

Be Aware of Your Zones

Your zones as a defender are another thing you need to have a good hold of if you want to be successful on the ice. When the puck is in your end, there are generally two zones that defenders will play in. This is the slot zone or the corner zone.

The slot zone is right in front of the goalie and extends out to the blue line length-wise, and the faceoff circles width-wise. Offensive players shooting from this zone have the highest chances of scoring, so there needs to be a defender here at all times.

The other zone is the corner zone, which is simply in the corners of your defensive zone. Defenders will often use their physicality in this zone to push players against the boards to dislodge the puck.

How you play will often depend on which zone you are in, but either way, you want to position yourself well to protect the net, take the puck from the opponent, and ensure you don’t overcommit to anything and get passed or beaten by the offensive player.

Don’t Forget Your Role in the Offense

While the primary role when playing defense is to stop the opponent from scoring, there will indeed be some times when you need to focus on the offense. A defender’s role in the offense is generally quite simple.

In most cases, your main job will be to keep the puck in the attacking zone and cycle it back to your scorers if it comes out to you. Getting the puck on the net with a hard slap shot from the point is also a good idea.

Also, you need to be ready to begin backpedaling and/or putting pressure on the opposing team to prevent a break out. The longer the puck is in your opponent’s end of the ice, the better, so do all you can to keep it there.

In conclusion, playing defense can be challenging and requires a lot of work, but I hope that this guide has been able to help you improve. By focusing on the right skills, working on your fundamentals, and playing a complete game, you can certainly help your team win more games.