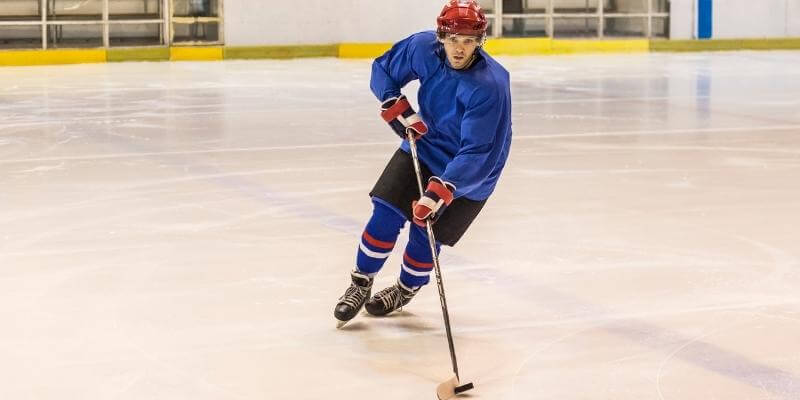 A major part of playing hockey is taking shots. Without taking shots, you won’t be able to score any of the goals that help your team win games. While not every shot will be good and go in, the more shots you take, the better your chance of scoring a big goal to put your team ahead.

As a result, many players (forwards and defenders alike) will spend a lot of time working on their shots. Being able to score is one of the most important and valuable skills on the ice, so if you want to improve your game as a whole, you better work on your shooting.

However, there are many different shots and not all are created equally. Some shots are better in certain situations than others and will have a better chance of leading to a goal.

This guide is going to take a closer look at each of the different shots, and what they are good for, in an effort to help you learn how to shoot a hockey puck.

Arguably the most classic and popular shot for players to take is the wrist shot. This shot is incredibly accurate and can be shot either high or low. It certainly has power but is definitely supposed to be more about accuracy than pure power.

It can be shot from the blue line, from in the slot, or essentially from anywhere else on the ice. The key to shooting a good wrist shot is positioning. You need to grip the stick in proper shooting form and keep the puck near your back foot.

You then want to transfer your weight onto your back foot and bring the stick back before quickly transferring weight forward and shifting it to your stick. When you are aimed at the target, and the puck reaches your front foot, release it and follow through by pointing your stick toe forward.

You will also want to slightly turn your wrists at the point of release to give the puck a little lift, if you so choose. Check out this video if you want to learn more about how to shoot a great wrist shot.

Another shot that you will likely know about is the slapshot. This shot is all about generating as much power and speed as possible, at the expense of a bit of accuracy. They are often shot from further away, and the follow-through you have dictates the location and height of the shot.

A slap shot begins with you holding the stick in proper shooting form, with the puck on the ice between your legs. Next, you need to raise your stick off the ice, and slowly transfer your weight towards your back foot, similar to the wrist shot.

Then, bring the stick down and towards the puck, while bringing your weight forward and try to hit the ice right before the puck with your blade, to send the puck rocketing forward with immense speed and power.

During the follow-through, angle your shoulders and hips to where you would like to see the puck go. Be sure to watch this video if you want to improve your slapshot technique.

You can shoot a snapshot by raising your stick back like a slap shot (though not as high), and ending the shot with a strong flick of the wrist like you would with a wrister. It is the best of both worlds and is a shot that is growing quite popular.

Consider giving this video a look to get a look at how to take a good snapshot.

During the game, the puck won’t always end perfectly on your stick, and you may need to improvise. If the puck finds its way to the back of your stick when you are close to the goal, instead of flipping it around, why not attempt a backhand?

This is a shot where you shoot the puck from the back of your blade, not the front. These shots are unfortunately not very hard or accurate, but can work in a pinch. In addition to this being a good way to make something out of nothing, a backhand shot can also surprise the opponent.

A backhanded shot will often be similar to a wrist shot, as you aim to roll the puck to your front foot, and then quickly rotate your wrists to open and then snap the blade to send the shot soaring to its destination.

If you want to learn how to improve your backhand, give this video a look.

I hope this article has been able to teach you not only how to shoot a puck but also helped you learn a little more about the different shots you can take. You won’t become Auston Matthews overnight, but with enough work, you can improve your shooting and goal-scoring ability.