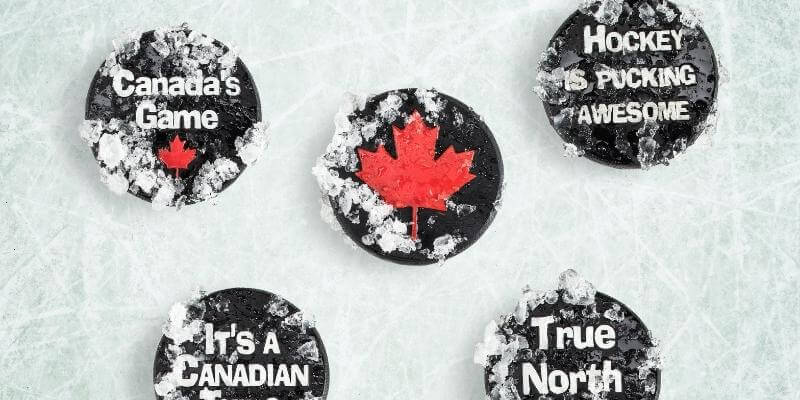 Without a puck to shoot, pass, steal and score, the game of hockey as we know it simply cannot be played. But have you ever wondered how much that little black disk flying at high speeds along the ice weighs? In the NHL, a puck needs to weigh between 5.5 and 6 ounces.

For those who use the metric system, that is between 155 and 170 grams. While this is light, these pucks flying at high speeds can still pack a punch, which is why it’s important to always wear protective equipment, whether playing in a game or just messing around with friends.

However, there are also pucks created for youth and younger players to use. These fall anywhere between 4 and 4.5 ounces and are often blue in color, which makes it easy to distinguish them from standard-sized pucks.

What Material is a Puck Made Of?

While the weight of the puck is important to know, so is the material it is made of. All pucks in the NHL are made of vulcanized rubber, along with a few other chemicals. The vulcanization of rubber is simply the process of heating and hardening the normally-soft material.

This allows pucks to be much more resilient and strong, and won’t wear or chip over time in most cases. If you tried to play hockey with a lighter and softer rubber puck, it would be hard to control the puck and generate as much power behind shots.

Of course, other pucks made of materials like foam are commonly used during practice or for children who prefer something a little lighter. Not only that, but a lighter puck being shot can lead to fewer injuries, as getting a hard puck to the leg, arm, back, or chest doesn’t feel great.

You may have noticed that all NHL pucks are black. This helps them be seen easily on the white ice, but as mentioned earlier, some pucks can come in different colors like blue. Also, originally, pucks were made by cutting the edges off rubber balls, which were often black in color.

How Is It Made?

Now that you know what a puck is made of and how much they weigh, how are they made? Well, the process can be complex at times and there are actually multiple different methods for how pucks are made. The first is for practice pucks or pucks that are given or sold as souvenirs.

These pucks are made using 40-foot-long rubber tubes that are sliced into pieces, then dropped into a two-piece mold and compressed together. This method is relatively quick and can create 10,000 pucks in a day. However, the process for regulation game pucks is more involved.

If the puck is destined for use in a game, it is made by mixing rubber with a bonding material. This mix is then placed into a mold at room temperature and compressed together to form the final puck shape. This method can create about 5,000 pucks in a week.

Also, once made, pucks are kept on ice and chilled before they are ready to be used. There are a few reasons for this. First of all, if these rubber pucks get too warm, they can expand and become a little bouncy, which doesn’t make for a great hockey-playing experience.

Warm hockey pucks are also more likely to become damaged than frozen ones, and pucks that are cold often glide easier on the ice and don’t get stuck or caught nearly as much.

So while pucks are small and relatively light, a lot goes into creating them to ensure they perform as they need to during a game. Is there anything you feel like I should have mentioned in this guide but didn’t? If so, don’t hesitate to let me know in the comment section!