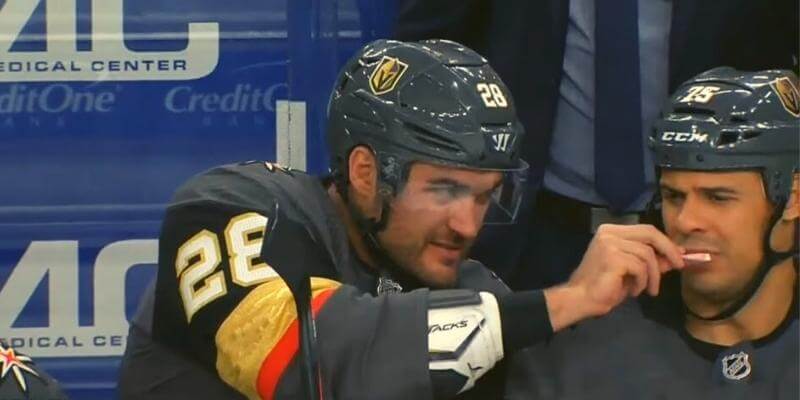 If you have ever been watching a hockey game and have seen players or coaches sniffing a small white pouch or packet, you might have been more than a little confused. What are they sniffing, and why do they look so disgusted afterwards?

The reason for the silly faces and reactions is because what the players are sniffing are smelling salts. These have long been a pregame ritual that many players will partake in during the game, too. You may have even experienced them yourself at one time or another.

But what exactly are they? This guide is going to cover not only what they are and what they do, but also why they have been used in hockey so religiously for years.

What are Smelling Salts?

Of course, there are different kinds that may use different methods, too. They can be found online or in many stores, but avoid using pure ammonia and sniffing that, as the concentration will be too strong for your needs.

These smelling salts also feature a very strong odor, and one that smells awful, and smelling them can almost be like getting punched in the face. It is this pungent smell that leads to the funny and animated faces you see on a player’s face when they sniff the salts.

But despite the bad smell, these salts (and smelling them) are relatively harmless in most cases when used from time to time. Of course, if you use them all the time or hold them too close to the nose can indeed be irritating and possibly dangerous, so always exercise caution.

Why Do Hockey Players Use Smelling Salts?

So now you know what they are, why do players sniff these smelling salts, especially when they smell so bad? The main reason that players sniff smelling salts is to increase their alertness on the ice. The awful smell instantly wakes people up and gets them ready for the game.

They provide a quick burst of adrenaline to a player and help you get your head in the game and focus. This little jolt can be all you need to help feel like you are at your best and ready for anything that your opponents may throw at them.

However, despite their widespread use, there are no real stats that show smelling salts have any real benefit to player performance on the ice. There is a good chance that confirmation bias is also at play here.

Smelling salts can certainly help wake somebody up and become more alert in the short term, but many believe they are still used for primarily superstitious purposes, as many players have the salts as an important part of their ritual.

Many hockey players have a specific ritual and even if it may make no sense, they stick to it. If using smelling salts is a part of their ritual, they will continue to do it, even if there is no real reason outside of a quick burst of wakefulness and alertness.

While smelling salts are most often associated with hockey, they are actually commonly used in a variety of different sports. Football players will commonly use them to get themselves, as well as powerlifters before a big lift, too.

In the past, they were also used outside of sports, to aid those who were feeling faint or to wake someone up who had passed out for one reason or another.

I hope this article has been able to help you learn not only what smelling salts are, but why they are used on the benches and in the dressing rooms of hockey arenas all over the world to help players stay as alert as possible during the game.

Have you ever used smelling salts? And what do you think about their continued use in the NHL and NFL? Let me know in a comment down below.