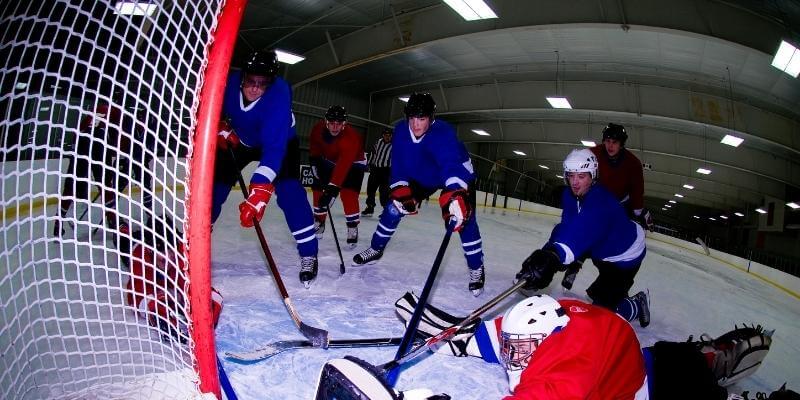 When hockey players first learn to play the game, they decide whether to use a right or left-handed stick. While some are ambidextrous and can play both ways, most players have a preferred way to shoot and pass the puck.

While the majority of the population throughout North America is right-handed, more hockey players are actually left-handed when it comes to the sticks they use. But why is this the case? Why are there far more lefties than right-handed players in hockey? Keep reading to find out.

Just How Many Hockey Players are Left-Handed vs. Right?

So just how many left-handed players are there compared to right-handed? While it is hard to know the stats for every hockey player all over the world, we can look to the NHL for a closer look at the statistics and numbers.

In general, around 60-70% of NHL players are left-handed, while the remaining 30-40% shoot right-handed.

Also, since curved blades have come around in the 1960s, many manufacturers sell almost double the number of left-handed sticks than those that are right-handed.

This shows that players at all levels are generally shooting left far more often than they are shooting right. From the minors, to the NHL, this is something that has been happening for a very long time.

These numbers show a major difference, but to many individuals, this is confusing. They may wonder why it isn’t closer to 50-50, or even leaning more towards right-handers due to most people being right-hand dominant in their lives?

Why Are So Many Left-Handed?

While you might think that this trend has something to do with more left-handed individuals being good hockey players, that isn’t actually the case. Most people believe there are more left-handed players because of how they were brought up/learned the game.

Canada, which is home to more NHL players than any other country, generally brings up young players by teaching them to hold the top of the stick with their dominant hand. This means players who are right-dominant will use a left-handed stick.

So while they shoot left, it is actually their right hand that remains at the top of the stick, which is the hand that largely controls the stick. Also, during a poke check, the bottom hand is normally removed from the stick, so players often want their dominant hand at the top.

While the USA still has more left-handed players than right, the numbers aren’t as extreme as they are in Canada and other nations. This is often because this hand-placement method of teaching young players isn’t as prevalent in the USA as it is in Canada.

So while it is called “left handed”, those who shoot that way generally have their right hand in a place that offers them more control over the stick. Having the stronger hand near the butt end of the stick also makes stickhandling much easier and more fluid, too.

Some players may simply feel more natural shooting left, too, but the large influx of left-handers is primarily due to how children learned to hold the stick and shoot/pass the puck.

If you are a left-handed player, there is no shortage of role models to base your game off of. Some of the best left-handed players currently in the NHL include Connor McDavid, Sidney Crosby, Auston Matthews, and many others.

Many of the best and most influential players in the history of the game also shot left-handed. This includes Wayne Gretzky, Jaromir Jagr, Mark Messier, and dozens of others. Of course, there have also been plenty of great right-handers, but this list of lefties is certainly impressive.

I hope this article has helped you be able to understand why many hockey players are left-handed. If you feel I left something out that could have provided additional value to this article, be sure to let me know in a comment below.