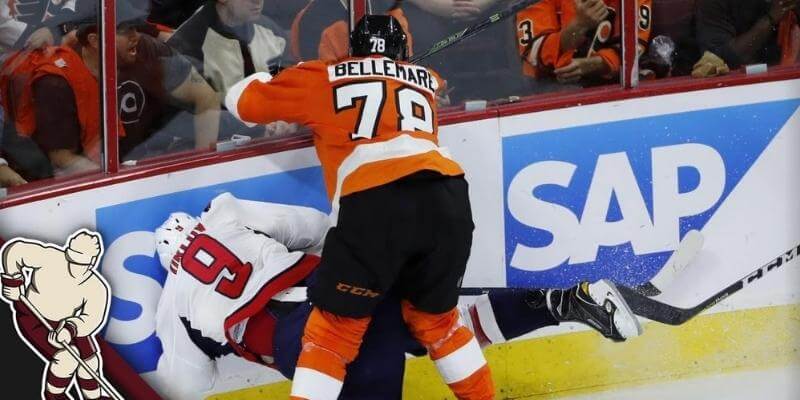 Hockey is a very fast-paced game that is very physical in nature. Of course, while checking is legal, there are some hits and plays deemed illegal. One example is boarding. Boarding is the action where a player causes another player to go dangerously into the boards.

This can be a check, a trip, a push, or another action that drives a player violently into the boards. Oftentimes this can only be a minor infraction, while in others it can lead to catastrophic injuries that can alter or even end careers.

This guide is going to take a closer look at what boarding is in hockey, and a little bit more about it.

As we mentioned briefly, boarding is one player drives another player into the boards of the rink. This is often a check from behind, or a check that sends a player propelling back into the boards, but can also be as a result of a trip or shove.

It might be done in order to get a player off the puck or stop their momentum, but is also done in order to punish players, or intimidate the opposing team. It is similar to a penalty-like charging, only that it needs to have the boards involved.

Players can be checked legally into the boards, and it happens all the time during a game. But when it is done in a particularly dangerous and unsafe manner, or an injury results because of it, a penalty is often called.

The Penalty for Boarding

As with other infractions that are deemed illegal in the sport, there is a penalty that will be handed out for someone who violently checks their opponents into the boards. This could be a minor penalty, a major penalty, a game misconduct, or even a match penalty.

It is generally up to the referee to determine which penalty to give depending on the severity. If it is minor and relatively tame, a minor penalty of two minutes will be given. If the hit is a little worse, it will be given a major penalty.

If the hit leads to an injury to the face or head, and a major penalty is assessed for the hit, a game misconduct will be given. The same goes for if the hit was very reckless. A match penalty is handed out when the ref determines a hit was made with intent to injure and was deliberate.

A match penalty results in a player being ejected from the game, like with a game misconduct, but also comes with a high likelihood of something like a fine or suspension. Their past history and record as a player will often come into play when determining their punishment.

Why is Boarding so Dangerous?

While all types of penalties and hits in hockey are potentially dangerous for players, this is especially true for boarding. Any time a player is hit into the hard boards, the potential for injury is very high.

The boards are made of high-density and tough polyethylene, and don’t feel great to get run into at high speeds. It is very unforgiving, and even all the padding and equipment a hockey play has may not protect them from pain or injuries.

Also, with many victims of boarding being defenseless and unaware of the hit, it can be even worse. When a player can see or feel a hit or check coming, they are able to brace themselves to prepare their body for the contact, and handle it better.

If it comes from behind, it can be incredibly dangerous, especially if the hit sends them face-first into the boards. However, even hard hits into the boards from the front can be dangerous and painful as well.

I hope this guide has been able to help you learn a little more about what boarding is in hockey and what it means. If you feel I left something out that could have been added to this article, don’t hesitate to let me know in a comment below.