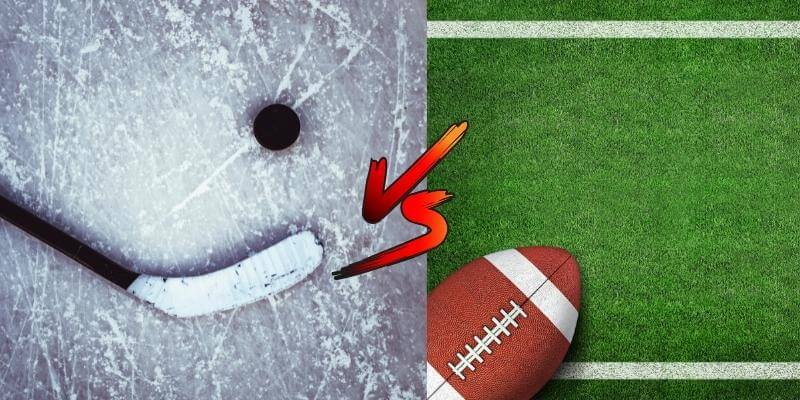 Sports of all shapes and sizes are beloved by billions of people all over the world. They are not only fun to play, but also great to watch. One of the most popular is football.  The NFL is wildly popular, and the game itself is generally among the easiest to play and understand.

But while football is great and is among my favorite sports, I believe hockey still has a leg up in several areas. Without any further ado, this article is going to go over why I believe hockey is a better sport than American football.

1. It is Action-Packed All Game Long

Perhaps the biggest thing that hockey has going for it over football is that it is action-packed from start to finish. Both football and hockey have an hour on the clock, but in football, players only play in 15-second spurts or so, with that long (or longer) in between plays.

This means there is a lot of downtime between the big runs, nice catches, and huge hits. In hockey, the game is played straight through, with only the odd whistle or stoppage in play. The game flows better and there is a ton more action at all times to watch and participate in.

2. The Players are Tougher

While football players are some of the strongest athletes on the planet, you cannot match the toughness of hockey players. They will regularly play with broken bones, sore muscles, after getting stitched and even after their teeth get knocked out.

Injuries don’t keep them down, and getting a player to stay out of the game is no easy task. Also, hockey players often play three or four games a week, which is far more than the one that football players will partake in.

3. The Game is Faster

The speed of the game is another benefit of hockey. In addition to looking cool, playing on ice makes the game a lot faster. The puck and players alike can travel at extreme speeds and this provides a ton more excitement than a sport like football.

Skating on ice is always faster than running on turf, and this speed can lead to some big plays, huge hits and makes players almost look inhuman with how quickly they move and shoot/pass the puck.

4. The Overtime is the Most Exciting

Overtime is another thing that hockey has going for it. The 3-on-3 rule in NHL overtime makes it the most exciting overtime period in sports. With only three skaters on each side, there is a ton of open ice which leads to a fast-paced overtime period with a lot of scoring chances.

Football overtime is fun and can lead to some edge-of-your-seat dramatic moments, but nothing compares to an overtime game winner in hockey. This 5-minute period will have your attention for the whole time, and if that doesn’t decide the game, a shootout will.

5. It is Truly a Team Sport

In hockey, the game is truly a team sport. In football, the success of your team is often dictated by the play of the quarterback, as they start every single play with the ball in their hands. However, in hockey, it is a full team effort.

You need every line to play well, and it takes a team effort to win. One player cannot do it all. Sure, you have superstars, but having the best players doesn’t always mean you have the best team.

Teams that work together towards a common goal will almost always beat a team with skill when everyone plays as an individual.

The traditions that are common in hockey are another reason why I think it is a better sport than football. One of the best is the idea of a playoff beard. Players on teams still in the playoffs won’t shave until they are eliminated, which leads to some pretty incredible and scruffy beards.

While all sports are great and everyone has their favorite, these are the reasons why I think hockey is better than football. Do you agree or disagree with me? Either way, let me know in a comment below.