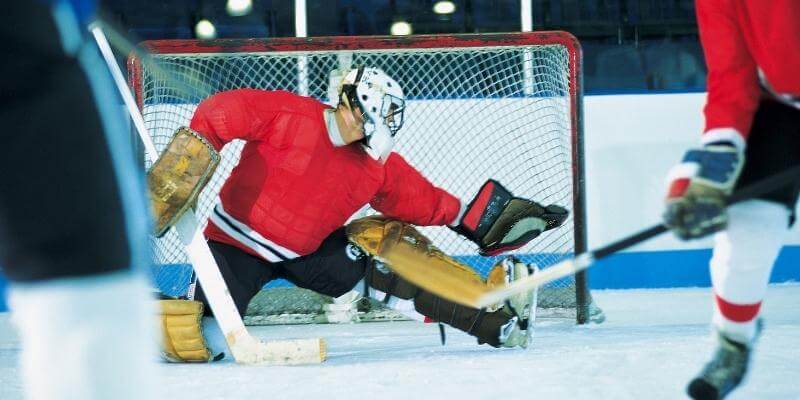 Playing goalie is without a doubt one of the most difficult jobs in hockey. You are the last line of defense for your team, and need to be incredibly confident in your abilities. Not only that, but you have to be okay with getting pucks shot at you all game long, which can be terrifying.

While players have goals, assists, hits, and other stats used to evaluate their performance, how is the performance of a goaltender evaluated? One of the most important stats is their save percentage on the ice.

Keep reading to learn not only what a good save percentage is, but also more about the stat itself and some of the goalies with the best save percentages in history.

What is Save Percentage and How is It Calculated?

By dividing the 36 saves from the 40 shots, you can see that the goalie will have a save percentage of .9 (or 90%). The higher the save percentage, the better the performance by the goalie.

In addition to being measured on a per-game basis, save percentages can also be measured and tracked over a given season, and even an entire career.

What is Considered a Good Save Percentage?

The average save percentage generally stays around .91 (or 91%), so anything better than .915 or so will be considered good. Anything over .92 is generally spectacular, and anything under .90 is quite weak.

While goalie play is a major part of save percentages, the teams themselves can also influence the stat. As teams or leaguers become better at defending, and as more shots are taken, save percentages will naturally rise higher and higher.

The Best Save Percentages of All Time

History is full of great goalies, and some have had some incredibly high save percentages during their careers. As far as the best career save percentage, that award goes to Dominik Hasek. During his 700-plus career games, he maintained a save percentage of .922 (or 92.2%).

This should come as no surprise to anyone that watched him play. Hasek won two Stanley Cups, was given the Vezina six times as the NHL’s best goalie and even won the Hart (equivalent to the MVP) twice.

But the best season save percentage a goalie has ever had came from Jacques Plante back in the 1970-71 season. The legendary Plante has an absurd save percentage of .944, and he also holds the record for the second-highest with a .940.

Other Goalie Stats Worth Checking Out

While save percentage is an important stat in evaluating the performance of goalies, it is far from the only one that should be looked at. There are several other goaltender stats to observe to get a better sense of their overall quality of play.

One such stat is GAA (goals against average). This stat measures the amount of goals scored on a goalie during 60 minutes of play. The lower the GAA, the lower the number of goals a goalie is expected to give up during a game.

Another goalie stat often looked at is wins, which is essentially how many wins the team has gotten while they were in the net. While it can show that a goalie is playing well, it often has more to do with their team and how much support they are getting, than their individual efforts in goal.

There are also advanced goalie stats that can be examined, but they still aren’t as popular or as widely used yet. These include things like expected save percentage, goals saved above average, and low-high danger save percentage.