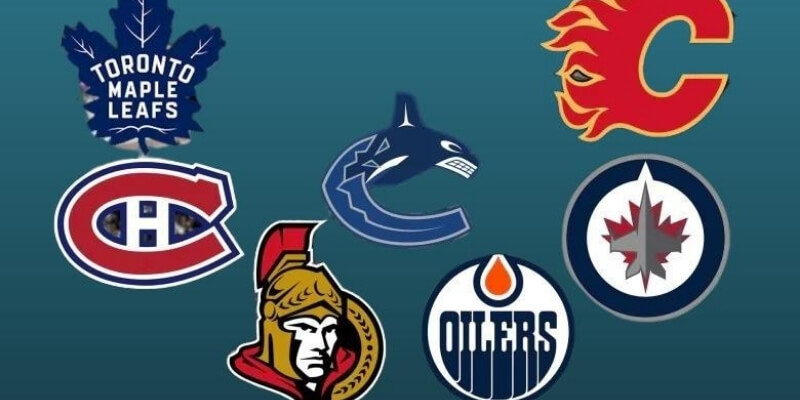 Canadian players often dominate the NHL as a majority of the best players on the planet hail from the country of Canada. Connor McDavid, Sidney Crosby, and Nathan Mackinnon are just a few players who grew up playing hockey in Canada, where the sport is incredibly popular.

But despite how synonymous Canada is with hockey, only seven teams in the NHL are actually located in Canada. This guide is going to take a closer look at these seven teams and help you understand their history, their best players, and much more.

Arguably the most storied franchise in the NHL, the Montreal Canadiens has been a team since 1909 but joined the NHL a few years later in 1917. They quickly became a force to be reckoned with and found a lot of success.

Throughout their history, they have won a whopping 24 Stanley Cups, which is the most by any team. They have made the playoffs over 80 times and won their division many times. Their logo is one of the most memorable and beloved in sports, as well.

The team has had dozens of Hall of Fame players over the years and it is hard to choose their best. Any of Guy LaFleur, Jacques Plante, Maurice Richard, Patrick Roy, Jean Beliveau, or Doug Harvey are worthy of being called the best in history.

Another of the most popular Canadian teams in the NHL is the Toronto Maple Leafs, who also joined the NHL in 1917. They began as the Arenas, and then became known as the St. Patricks, before finally becoming the Maple Leafs in 1927.

The team has won 13 Stanley Cups through their history, but have famously not hoisted the Stanley Cup since way back in the mid-1960s. They are one of the most valuable teams, and have a very loyal fanbase across the world.

Their best player is arguably Mats Sundin, who is the franchise leader in points and goals, and also captained the team for eleven years. Other stars who donned the maple leaf include Doug Gilmour, Wendel Clark, and Borje Salming.

The next Canadian team to enter the NHL was the Vancouver Canucks, who joined the league in 1970 as an expansion team. They have made the playoffs plenty of times during their history, and have enjoyed some spectacular seasons.

But despite how long they have been around, the Canucks are yet to win their first Stanley Cup. They have come close, but haven’t been able to win one yet. As far as the best player for the club, there are plenty to choose from including Pavel Bure, Markus Naslund, and Henrik Sedin.

Despite only joining the NHL in the 1979-80 season, the Edmonton Oilers have enjoyed a ton of success over the years. They have taken home five Stanley Cups, all of which were in the 1980s.

While there are plenty of reasons for their success, a lot of it has to do with the fact that Wayne Gretzky played here. He is the near-unanimous choice as the best hockey player of all time and owns a laundry list of league records, many of which will never ever be broken again.

Of course, plenty of other great players have had fantastic careers there like Connor McDavid, Mark Messier, Paul Coffey, and Jari Kuri.

The Flames were initially founded as the Atlanta Flames in 1972 but moved to Calgary in 1980. They have since become one of the most popular teams in Western Canada, and have won a Stanley Cup, back in 1988-89, a season where they also had the best record in the NHL.

They are rivals with the aforementioned Edmonton Oilers, in a rivalry that is known as “The Battle of Alberta” (which is the province where both cities are located). The best player in the history of the club is likely Jarome Iginla, who leads the club in games played, points and goals.

The Ottawa Senators joined the NHL in 1992, and have no relation to the old Ottawa Senators teams of the 1910s to 1930s. Through their short history, the team has made the playoffs over a dozen times and had some great teams, but hasn’t won a Stanley Cup.

They came close in 2007 but lost in 5 games to the Anaheim Ducks. In recent years, they have experienced struggles and have been one of the worst teams in the NHL. Their best player has likely been Daniel Alfredsson, who has more points, goals, and assists than any other Senator.

The most recent Canadian NHL team to join was the Winnipeg Jets, who rejoined the NHL in 2011 after the Atlanta Thrashers team was moved up north. Since then, they have had a few good seasons and players, but a decade is too short a time for a team’s history to develop.

It is important to know that there was a Winnipeg Jets team that existed previously from 1972-1996, but they eventually moved and became the Phoenix/Arizona Coyotes. This team won their division a few times, but never won a Stanley Cup, either.

Throughout both teams, the best player in Jets history is Dale Hawerchuk, who was the face of the team for almost a decade. Other names like Teemu Selanne and Bobby Hull were also incredible for the Jets. The modern Jets (Thrashers) best player was likely Ilya Kovalchuk.

I hope this guide has helped you learn a little more about the NHL teams that reside to the north of the border. If there are any other pieces of information you would have liked to see included, don’t hesitate to let me know in a comment.