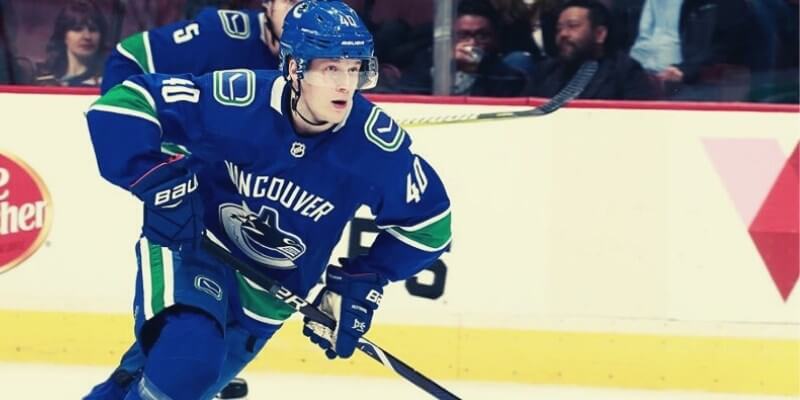 While ice hockey was first played and is most popular in Canada, it is far from the only nation that has produced amazing talents that have left their mark on the league. One of the best countries for developing incredibly skilled players is Sweden.

Whether you look at players today, or from the past, the NHL has seen its fair share of Swedish superstars. But which are the best? Read on to learn a little more about the five best current NHL players that hail from Sweden, and the five best that have retired, in no particular order.

Despite only being 22 as of the end of the 2021 NHL season, Pettersson is already one of the best Swedish players in the league. In only 165 games, he has already scored 153 points and he will likely continue to score in bunches through the rest of his career.

He took home the Calder Trophy in his inaugural season and is a very versatile player, equally talented at scoring and assisting. Pettersson is as slick as they come on the ice, as he is very creative with his plays on the ice.

Only time will tell where he will rank amongst the Swedish greats, but he certainly has a lot of potential and is off to a great start.

Karlsson is without a doubt one of the most offensively talented defensemen of all time, Swedish or not. He has won two Norris Trophies as the league’s best defender and regularly led all defensemen in scoring.

Best known for his time with the Ottawa Senators, Karlsson has also enjoyed a couple of quality seasons in San Jose playing for the Sharks. He is a very confident player, who makes everything he does look effortless on the ice.

During this career thus far, he has scored over 600 points and isn’t done yet. While he is a great shooter, it is his prowess as a passer, whether on the offensive side of the ice or making outlet passes from his own end.

Few defenders in the NHL are as physically imposing as Victor Hedman. Standing at 6’6, he is capable of locking down the opponent’s best player and is not easily pushed or moved around. He is a force of nature, plays a ton of minutes for his team, and simply puts in the hard work.

However, he is more than capable on the offensive side of the ice, as well. Despite being very well-rounded, Hedman has already scored over 100 goals and has over 400 assists to his name. He is very smart when joining the offensive rush, to ensure he is never out of position.

Fresh off of a 2020 Stanley Cup win in which he also earned the Conn Smythe for playoff MVP, Hedman is still playing his best over a decade after being drafted first overall in 2009.

Landeskog is currently the captain for one of the most exciting and promising teams in the league, the Colorado Avalanche. He has been their captain for years and when he was named the captain in 2012, he was the youngest team captain in NHL history.

After winning the Calder Trophy as the rookie of the year his first season, he has settled in nicely as a powerful player, with a scoring touch as is evident by his 500+ NHL points.

He is an incredible leader, as not only can he provide a scoring spark for his team, but he’s not afraid to fight and stand up for his teammates, as well. While he hasn’t always been the most consistent player, he can take over a game and truly be a superstar.

During the past decade-plus in the NHL, no player has been more underrated than Nicklas Backstrom. During his career, he is a near-point-per-game player as he currently has 980 points in 1011 games played throughout his career.

Despite these impressive stats, Backstrom has only been named to one All Star game, even though he has consistently performed well. While a solid all-around player, Backstrom’s best known for his incredibly accurate and crisp passing.

When his career is done, there is a chance Backstrom has the most assists of any Swedish player, as he is already in the top five, with plenty of gas still in the tank.

The highest scoring Swedish player in NHL history is Mats Sundin. Throughout his over 1300 games played, he scored 564 goals and picked up 785 assists. He was incredibly consistent on the ice, and could always be relied on by his teams.

Sundin is without a doubt best known for his many years as the captain of the Toronto Maple Leafs, as he was their captain for 11 seasons. He also played for the Quebec Nordiques and the Vancouver Canucks, during his illustrious career.

In terms of his play style, Sundin was a natural scorer, but also a great passer as well. He was an offensive threat in every sense of the word, and his hockey IQ was also sky-high, as well. Sundin was also an incredible leader and was very stoic in nature.

In his 18 seasons in the NHL, Alfredsson was one of the premier two-way players in the league. He scored 1157 points, while also not being afraid to get physical and help his team on the defensive end.

Alfredsson was beloved as the captain of the Ottawa Senators for over a decade and played one season with the Detroit Red Wings before calling it a career in 2014. He holds many Senators records, including most regular season goals, assists, and points.

Alfredsson also has the distinction of being the first captain who was born and trained in Europe to lead his team to the Stanley Cup Final, when he helped the Senators do so in 2007.

Not only is Nicklas Lidstrom the best Swedish defenseman of all time, but he is also arguably one of the best to ever set foot on an NHL rink. He played 20 seasons in the NHL, all for the Detroit Red Wings. He even captained the team for the last six seasons of his Hall of Fame career.

He never missed the playoffs during his career, won four Stanley Cups, and won seven Norris trophies, which is given to the best defenseman in the league. He scored 1142 points in his career, which is good for sixth most all-time by a defenseman.

As you might have guessed by his scoring titles, Nicklas Lidstrom was an offensive defenseman with an incredible eye for the puck and an incredibly smooth and clean playing style. He was also a very durable player, and one without a lot of weaknesses.

Few scorers in league history, let alone Swedish scorers, can say they were as talented as Peter Forsberg. He scored 885 points in his NHL career and did so in only 708 games played. His points-per-game for his career ranks ninth all-time, showing how elite a scorer he truly was.

He played for a few teams during his career but was best known for his years with the Colorado Avalanche. In addition to being a great scorer and passer, Forsberg was known for his great vision on the ice, and his willingness to play physically and lead by example, day in and day out.

While his career was relatively short in the NHL, due to injuries, he made a huge impact by winning everything from Stanley Cups to a Hart Memorial Trophy for being the most valuable player in the league.

Salming was one of the very first European players to find success in the NHL and surely inspired future generations of players from the continent. Before Salming, European players had a reputation of lacking toughness, and he completely changed that perception.

He was beloved by fans for his shot-blocking efforts and his tenacity and durability. During a game in 1986, he had his face cut by the skate of an opponent, which required 200+ stitches. Despite this, he was back playing only a few days later.

But in addition to being a tough defender not afraid to get his hands dirty, he was also a talented and crisp scorer. He put up 787 points during his career and holds many different Maple Leafs records as he spent well over a decade with the club.

Sweden has produced some of the most talented passers, scorers, and defenders in history. Whether they are retired or still playing, the nation has always been represented well in the league. Did I miss any Swedes that you felt deserved to be included? If so, let me know!