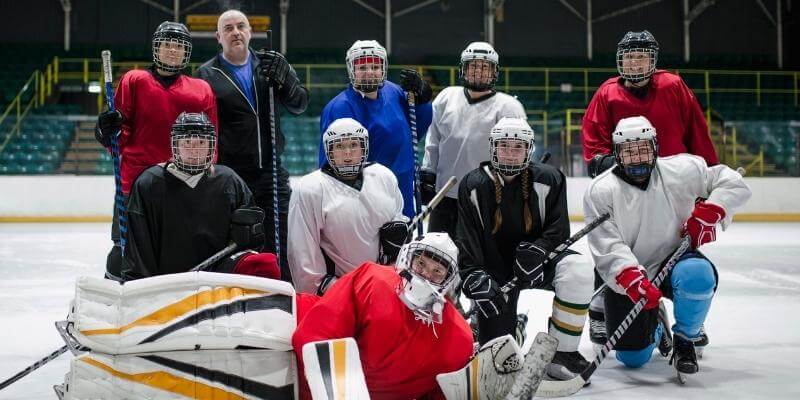 Throughout the years, many hockey players, coaches, and even celebrities have made some very note-worthy quotes about hockey. Some have been said to be funny, some have been said to inspire and motivate people, and many have highlighted things like teamwork and hard work.

These quotes are great to look through every now and then, and can be just what you need to turn your day around, put a smile on your face, and make you feel better. I have decided to take some of the best hockey-related quotes of all time, and share them with you in one post.

I will group the quotes into different categories so you can easily find the type of quote you are looking to read. The categories will be inspirational and motivational quotes, teamwork quotes, funny quotes, and quotes about hard work.

Keep reading to see some of the best hockey quotes of all time, and learn a little more about what makes them so great.

Many of the famous quotes in the hockey world are inspirational and motivational in nature. These are quotes to get you fired up, motivate you to play better, or simply feel more inspired in your day-to-day life.

Gretzky has his fair share of great hockey quotes, but this is one of the best. It highlights the importance of putting in the time and effort to be the best you can be. Any player can go to where the puck is, but it takes someone special to be able to know what will happen next.

This is a great hockey quote, but also has value in general. Life becomes easier and better if you begin to look forward and consider things coming up, as opposed to just looking at what is right in front of you.

Hayley Wickenheiser is one of the best female hockey players of all time, and was a member of the Canadian national team for over two decades. Despite this, she (and unfortunately many other female players) often see a ton of negative commentary and doubt about their skills.

This is a great quote to remind yourself not to take the words and thoughts of others too seriously. If you put your mind to something and work at your craft, you can be successful, despite all of the doubters that you may have in your life, and prove them wrong.

In order to win and succeed in life, you need to try things and take risks. Sure, you might miss and something might not go your way, but at least you tried, and that is the most important thing. This quote is very powerful and motivates people to try things, even if they are afraid of failure.

Sure, there is a chance you fail if you try and/or take a risk, but if you don’t try, then you are guaranteed to have nothing happen. Life is all about taking risks and trying things, and with enough work and attempts, you are sure to find success.

Another type of quote that we commonly hear is the quote about teamwork. Hockey is an incredibly teamwork-based sport, and you need a team to thrive and do well. These quotes are all about highlighting the importance of working together in hockey.

“To succeed in hockey, you need teamwork.”  – Henry Samueli

This is without a doubt one of the simplest quotes out there, but also one of the most impactful. Many sports can succeed with only one player doing well, but hockey is not that sport. Even the best player in the world isn’t enough to beat a team that works together.

If a team wants to win games, score more goals, or reach another objective of some kind, they need to work together in order to do it.

“Hockey is a unique sport in the sense that you need each and every guy helping each other and pulling in the same direction to be successful.” – Wayne Gretzky

Another great one from the Great One. Everyone on your team needs to share the same goal in mind, and be ready to put in the time, energy, and effort to reach it. If even a single person is being selfish or going against the grain, it can have awful results.

This makes a ton of sense for hockey, but also various other aspects of life. All of your coworkers need to be working towards the same goal within a project, and both parents need to be consistent to raise a child, for example.

“A hockey team is like a puzzle. Every piece is vital.” – Bob Hartley

Not only is teamwork itself important, but everyone needs to know their role. If everyone wants to be the hero who scores all the goals, no team can function. Everyone needs to be realistic about what they do well, and find ways to fit with the rest of the team.

Of course, there are also a ton of funny hockey quotes that have made the rounds over the years. These are sure to put a smile on your face, make you laugh, and show that even though hockey players are very tough, they also have a comedic side.

“I went to a fight the other night, and a hockey game broke out.” – Rodney Dangerfield

Legendary comedian Rodney Dangerfield said this classic quote a ways back and it never fails to make people smile or laugh. While there is much more to hockey than fighting, there is no doubt it is a beloved part of hockey in the eyes of many fans.

“We get nose jobs all the time in the NHL, and we don’t even have to go to the hospital.” – Brad Park

Hockey is without a doubt one of the roughest sports on the planet. All you need to do is look at the average players’ face to see this. Missing teeth, bruises, black eyes, and yes, crooked noses.

Whether it is from a hit, a punch, or a puck, many players have had their noses rearranged without needing to have a doctor involved in the process.

“How would you like a job where, every time you make a mistake, a big red light goes on and 18,000 people boo?” – Jacques Plante

While all professional athletes are often under the microscope, this is never more true than with hockey goalies. Anytime they make an error, it is a major deal and leads to the other team scoring a goal, much to the dismay of fans.

This is a quote that is not only fun but also very true. Most of us would be mortified if someone came to our work and let us have it like this because of one small mistake. Quotes like these help people see that players are humans, and deserve the benefit of the doubt.

Hockey requires a ton of hard work and dedication to be successful. Players put long hours into strengthening their bodies and working on skills. If you need a little boost to work a little harder in your day, these are the quotes for you.

“Nobody’s a natural. You work hard to get good and then work to get better. It’s hard to stay on top.” – Paul Coffey

This quote is all about the importance of hard work, even if you are incredibly naturally talented at something. Even if you are at the top of your game, you always need to continue working to elevate your game to new heights.

If you coast and don’t put in the time and work, you won’t stay on top forever, as those who put in the hard work will soon overtake you.

“Sometimes you do the hard work and set the table and somebody else eats the meal.” – Brian Burke

This is a great quote about putting in the hard work, even if you don’t get recognition for it. With this quote, Burke is referring to the success the Toronto Maple Leafs found soon after he was let go as their general manager.

So even though Burke was largely responsible for building the team in years past, he didn’t get a ton of credit for their success (i.e he set the table, but didn’t get to eat the meal and enjoy the success).

This is a good attitude to have, and highlights the importance of working hard, but also being aware that the world doesn’t always work in your favor, and someone else may end up enjoying the fruits of your labor.

These are far from the only hockey quotes out there, but are indeed some of the best. If you can think of any great quotes that you feel I should have included in this list, I’d love to hear about them in a comment below.