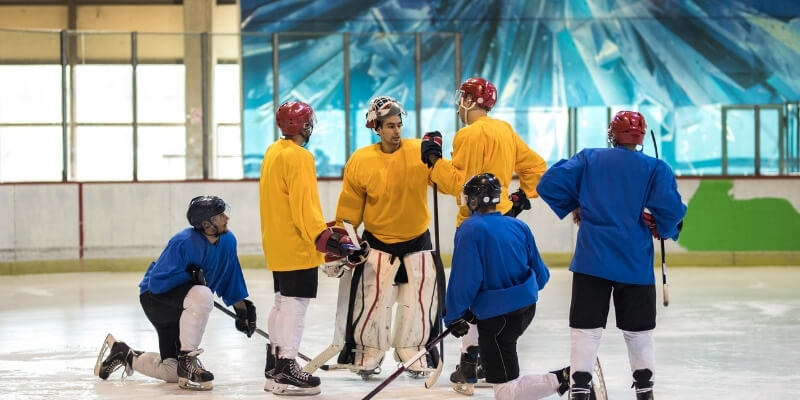 While hockey is about skating, shooting and passing, the existence of trash talk is also a major part of the game for many players. These chirps can help get under the skin of your opponent, and have them take their mind off of the game, even if only for a minute.

Players at almost every level will talk trash and chirp, from junior leagues, to beer leagues, to the pros. In general, it is all good-natured fun and used more as a tactic than to actually hurt opponents’ feelings.

Having played organized sports for my entire life, I’ve heard more than a couple of chirps over the years, and maybe even dished out one or two of my own. But what are the best hockey chirps out there to unnerve your opponents and get them off their game?

Keep reading to find out!

Many hockey players pride themselves on their toughness and being able to trudge through adversity and keep moving forward. This chirp equates your opponent to ten-ply toilet paper, which is incredibly soft and not at all tough or strong.

As you could imagine, many players (especially those who think they are tough), won’t be a fan of this one.

Pylons generally sit there either sectioning off some construction or directing traffic. They never move and are constantly getting driven and walked around.

This chirp is generally aimed at a relatively slow, immobile, or bad player that everyone skates laps around. If you want to let a player know you think they’re a notch below the rest of the players on the ice, this is the chirp to do it with.

Diving is an unfortunate problem in hockey. It is when a player gets a light shove or hit, and flails or falls around like they were hit by a truck, in order to get a penalty on the opposing player. It sometimes works, which is why many players do it.

If an opponent has been diving, this can be a creative and silly chirp to throw their way to let them know you know what they’re doing and don’t approve.

This one is all about implying a player is so bad that there is no way their coach let them onto the ice knowingly. It is a chirp that digs deep and implies it’s not only you that thinks they’re bad, but also that their coach wouldn’t let them out on the ice under normal circumstances.

It is also another one of those chirps that might take a second for some players to even understand what it means, which could help take their minds off the game for even longer.

Sometimes, simplicity is best when it comes to chirps. If you want to truly let your opponent know what you think, telling them they suck or are terrible is easiest. Also, no matter who the other player is, they will instantly understand this chirp.

While it isn’t very creative or overly funny, it gets the job done if you want to distract your opponent from the task at hand.

This one is particularly aimed at goalies, especially ones that have struggled during the game. Coupons generally only offer limited savings, so if they are saving more than a goaltender, that is generally a bad sign for the performance of said goalie.

Being a goaltender is incredibly mental, and getting them off their game even a little bit can dramatically affect their play on the ice.

Hands are incredibly important in hockey. They help with everything from passing, shooting, receiving passes and so much more. If a player has “no hands” it generally means they are uncoordinated on the ice, can’t control the puck and simply aren’t accurate.

By sending this chirp your opponent’s way, it is a creative way to tell them they’re struggling out there, while also having a little fun with them.

This is a very creative chirp, and one that not everyone will immediately understand. It is aimed at players who may not have a lot of skills and talent themselves, and rely on talented teammates to be able to pick up their trash.

Pigeons like garbage, and this chirp is all about telling a player you think they are bad and only find success when their more-talented teammates are there to help.

Any of these chirps are sure to get under the skin of your opponent and give your team a potential edge for the rest of the game. Did we miss any of your favorite chirps? If so, don’t hesitate to let us know about them in a comment below.