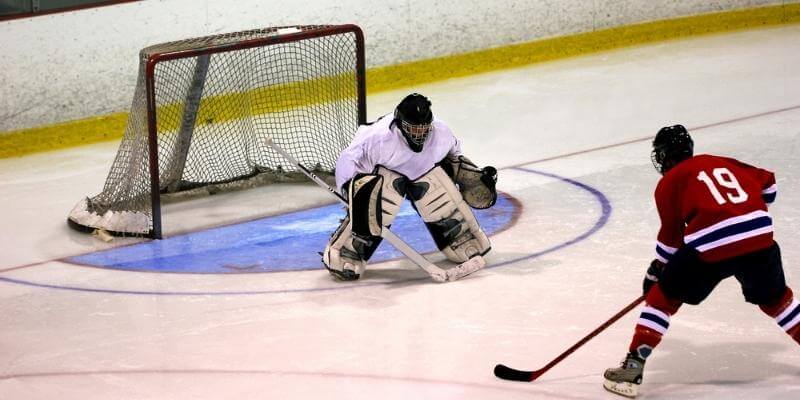 In sports, most games end with one side being named the winner and the other the loser. However, in all sports, there is the potential of the game being tied at the end of regulation. What follows is generally a short overtime period to decide on a winner.

While some sports games will simply end in a tie if this oftentime period doesn’t decide a winner, that isn’t the case with the NHL. If an NHL game is still tied after the 5-minute overtime period, the teams go on to have a shootout to decide who is the victor.

Read on to learn more about what a shootout is in hockey and how they work.

What is a Shootout?

As briefly touched on in the intro, a shootout is what happens if a winner isn’t decided by the overtime period in an NHL game. It is a penalty shot competition that consists of players getting a 1-on-1 chance to score on the opposing goalie.

Each team will pick their shooters, and will go through three rounds of shootouts, with each team getting three chances to score. The team that scores on more of these 1-on-1 chances will be victorious. Of course, tiebreaker rounds can be added as they are needed.

As you could imagine, most players will choose their best players to participate in the shootout, but every now and then there is a player who specializes in these situations. During the game, they may not be anything special, but will often shine when called upon to take a penalty shot.

It is important to know that shootouts only end ties in the regular season. In the playoffs, games go through continuous overtime periods until a team eventually scores and breaks the tie.

The Rules of the Shootout

Now that you know when a shootout occurs and what it is, it is important to be aware of their rules and how they work. While the idea might seem simple, there are plenty of rules that dictate how a shootout works.

A shootout begins with the puck sitting around center ice, and then the ref blows the whistle. At this point, the skater attempting to score will take the puck and try to score a 1-on-1 goal against the goalie.

The goalie isn’t allowed to throw their stick or other equipment at the player, and players are only allowed one shot, and cannot attempt to score the rebound. The player needs to be constantly moving the puck forward, too.

Then, after the shot is either stopped or goes in, the opposing team gets this same chance, and this goes back and forth until a team eventually wins. Also, it is up to the home team to decide whether they will shoot first and second in the shootout.

Shootout Stats and Records in the NHL

If you pay attention to and follow the NHL, you will know that shootouts are regularly common as many games not only end in ties but have an overtime period that solves nothing. But which players and teams generally have the best results when it comes to shootouts?

Well, the player with the highest shootout scoring percentage in history (with over 10 shots taken), is Peter Nummelin. In his 10 opportunities, he has scored 8 of them, which is much better than the average.

On the other side of things, the Philadelphia Flyers have only won 35.8% of their shootouts, which is by far the worst percentage in history.

While not an official shootout, a penalty shot is essentially the same idea as a shootout, so I figured I’d mention them. They follow the same rules as shootouts, except it is a one-time chance for a player to score.

Penalty shots occur when a scoring opportunity is ruined by some kind of illegal activity by an opponent. This could be anything from a skater being tripped while on a breakaway, to the net being knocked off during a clear scoring chance.

It is up to the referee to make the call if a penalty shot will occur, and through history, there have been some questionable calls regarding penalty shots. The player who had the breakaway will be the one to take the penalty shot to give them another opportunity to score.

I hope this guide has been able to help you learn more about shootouts, which are one of the most exciting things that can happen in an NHL game. If you feel that I missed something that could have improved this guide, feel free to let me know in a comment below!