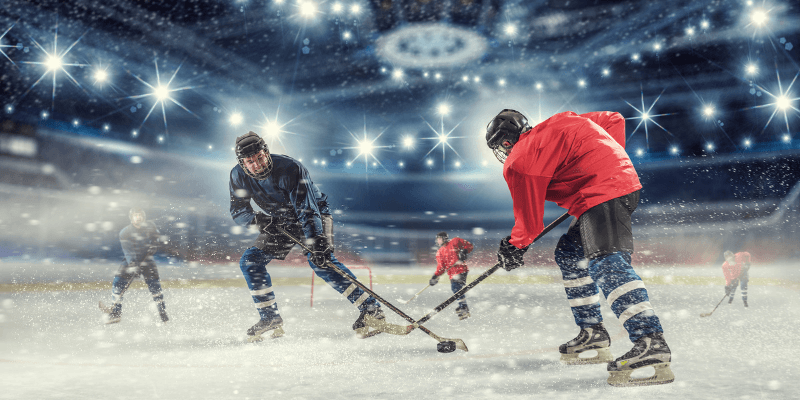 Hockey is an exciting game full of near-constant action from start to finish. However, sometimes players get too excited to score and enter the attacking zone that an offside call will occur.

An offside call is when a referee stops a game because a player crosses the blue line into the opposing attacking zone before the puck does.

In hockey, the player with the puck needs to be the first one to cross into the attacking zone, or the puck itself needs to be dumped in and a player needs to chase after it. A direct pass from one player to another cannot take place across the blue line.

Knowing the Three Zones of Hockey

In order to truly understand how offsides work, it is important to know the three different zones of hockey. They are the attacking zone, the neutral zone and the defensive zone. The attacking zone is where the team with the puck will attempt to score on their opponents.

The neutral zone is the space between the defensive and attacking zones, and is where teams will move the puck, take many faceoffs and make line changes. The defensive zone is in front of a team’s own goal and is where the defending team will try to stop the attacking from scoring.

However, players can freely pass back and forth over their own defensive blue line, but not their attacking. Also, a red line goes through the middle of the neutral zone, but that doesn’t have any relation or significance when it comes to the offside call.

In a hockey game, most of the action will take place in the defensive and attacking zones, with the neutral zone seeing some use, but normally just as the play develops or as teams change who is attacking and who is defending.

What Happens Once a Referee Calls a Player Offside?

Now that you have an idea of why offsides get called and what leads to them, what happens when it is called? While you may think it is a penalty, this is not the case. When a ref calls offsides, they will simply call a face-off at one of the two faceoff circles in the neutral zone.

This will occur on the side of the neutral zone closest to the attacking zone where the infraction occurs. So while this call stops the forward progress of the offense, it doesn’t penalize them too much as play will resume right outside of the attacking zone, if they can win the face-off.

While offside call certainly do occur frequently, players have gotten very good at timing things like their passing and skating. You will routinely see players cross the blue line at almost the exact same time as the puck, as the professionals have this down to a science.

You may also see players straddle the line and await the puck, to ensure no offside is called and ruin the attacking team’s momentum. This timing can be hard to master but is crucial in effectively getting into the neutral zone without going offside.

The History of Offsides and Why is it a Rule?

In order to understand the history of offsides, we need to take you back to the early days of the NHL. When the league first began, there were no forward passes allowed and the rink had no lines except for the goal lines, and the blue lines and red lines were only added later.

Because of no forward passing, scoring during the early days in the NHL was incredibly challenging. In order to speed up the game and increase scoring, forward passing was slowly adopted over time.

First, it was only allowed in the defensive and neutral zones, but soon forward passing became legal all over the ice. Unfortunately, this led to another problem that the NHL didn’t expect.

This made sure that offensive players had to come back and couldn’t simply sit and wait for the puck near their opponent’s goal and get an easy scoring chance every single time. This provided much better balance to the game and helped the game get to where it is today.

While the most common type of offsides is the traditional one we have mentioned so far, it is far from the only one. Another type of offsides is called delayed offside. This is where a player is offside, but the defending team ends up recovering the puck, not the offside player.

If the defending player is in a position to move the puck out of the zone, a delayed offside will be called. This is when the ref puts his arm up, and the offside player will have a chance to exit the attacking and then re-enter to attempt to take possession of the puck.

Of course, if the puck is cleared out of the zone by a defender, the offside call is stopped completely and the game will continue as normal. There is also the intentional offside. This takes place when a team will put a player offsides on purpose.

The main reason for this is for a team to try and get a line change when they were unable to otherwise. Players get tired quickly in hockey, and this slight break and the ability to switch up your lines can be very valuable at times.

Recent Change to the Offside Rule in the NHL

While many NHL rules have remained the same for decades, others go through frequent changes. One of the most recent changes to an NHL rule was actually to offsides, as the rule was tinkered within 2021.

In the past, a player’s skate had to be at least touching the blue line into the attacking zone or past it for them to be considered onside. Now, as long as the skate is above the plane of the blue line, that player is still onside and won’t be breaking the rule.

This helps with the flow of the game, as too many unnecessary offside calls can stop the flow of the game in its tracks. And whether the skate is actually touching the blue line or simply above it has little to no impact on the development of a particular play.

This was discovered largely due to coaches challenges on offside calls, and refs and the league began to see that many of the calls were occurring right after a player took his foot off the blue line.

I hope that the information included in this guide has been able to help you learn what offside is, how it works, why it is called and so much more. Are there any other pieces of information about offsides that you feel I should have included? If so, be sure to let me know in a comment!