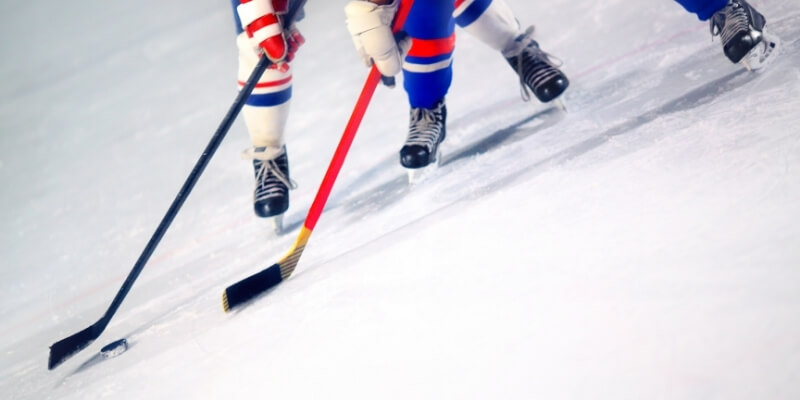 Hockey is a game of speed. The players and puck fly around the ice at a high pace and the game is very exciting as a result. The action is almost non-stop and it can sometimes even be difficult to follow the puck with how fast it moves.

However, there are also some rules in play that limit the movement of the puck and put a cap on where it can go at certain times. This is to ensure the game stays fair and the integrity of the game isn’t compromised.

One of these rules is icing. Icing is called when a player shoots or passes the puck from behind his own side of the center red line and it goes beyond the opposing team’s goal line. Once this occurs, play is stopped and a faceoff is taken in the offending team’s zone.

While many fans may be aware of icing, few understand why it is in place, how it works and the other intricacies and nuances surrounding it. In an effort to help, this guide is going to take a close look at what icing in hockey is to help you gain a deeper understanding.

As briefly mentioned earlier, an icing call takes place when a player shoots the puck from his team’s side of the red line, and it reaches past the opposing goal line. When the ref catches it, he will blow the whistle and have a faceoff in the zone of the team that iced the puck.

Of course, a defending player cannot just sit near the puck and wait for it to cross the line. If the ref believes the opposing team had a chance to play the puck before it was iced, they may not call it icing. This is often up to the discretion of the ref in these situations.

There are a few reasons why players may ice the puck. The most common is to clear the defensive zone and get the puck out to allow for a line change or to reduce the pressure that the opposing team is putting on. Sometimes, players may shoot it too far and ice it by accident.

Also, sometimes icing will happen if an errant pass is made or a long-distance shot isn’t accurate.

When and Why was Icing Introduced into the NHL?

So why was this icing rule initially introduced? Well, in the past, many teams would shoot the puck down the ice as a tactic to delay the game. If they were winning, they would simply shoot the puck into the other end, making it very difficult for opponents to get scoring chances.

Not only was this frustrating for the players on the losing team, but it also wasn’t a good experience for spectators. The final minutes of games were often terribly boring and annoying to watch, with little to no actual hockey taking place.

Icing was created to stop this practice. The rule became official in 1937 and has helped the flow of the game and ensured no team can simply waste the clock if they want to escape with a win. Teams need to play hard from the initial puck drop to the final horn if they want to win.

No Line Changes After Icing the Puck

While icing has always led to the opposing team having to take a faceoff on their own end, it was still done from time to time. In a dire situation on defense, it often made more sense to ice the puck and get a faceoff than allow the attacking team to maintain possession and score.

Sure, the faceoff in their end wasn’t great, but it was infinitely better than the attacking team having the puck and setting up a play. There were very few drawbacks of an icing call in certain situations.

Because of this, the NHL made a change to their icing rule. If a team ices the puck, they will not be able to make any line changes before the resulting faceoff. This means the team will have tired players on the ice against the fresh skaters on the opposing team.

This rule wasn’t brought in until the 2005-06 NHL season but has done a great job in deterring icing as players need to be cautious, especially if they are tired. If not, they could have to play defense while exhausted, which gives the other team a better chance to score.

Player Adjustments Made as a Result of Icing

When icing became a rule, players had to completely change the way they played. They needed to be much more careful when it came to shooting the puck down the ice, especially if their line was tired and worn out.

However, many players also learned to adapt, and that they could still essentially gain the benefits of icing (being able to line change and clear the puck), without actually icing it.

When clearing the puck from their own zone, players today will often flip the puck high up into the air and shoot it into the opposing zone. While the puck will not go as far as if they shot it along the ground, this prevented icing.

Not only that, but with the puck gaining additional height, it often allows teams to still make line changes to get fresh players out there before the opposing team gets the puck. So while the icing rule certainly cuts down on the time-wasting, players have adapted to still get the benefits.

While icing is commonly enforced, you may be watching and see something that looks like icing not be called. That is because there are some situations and circumstances where icing isn’t enforced.

First of all, if a team is killing a penalty, they can freely shoot the puck down into the opposing end and ice it, without the icing call. If a team has a power play, and the opposing team cannot ice the puck, that is simply too much of an advantage.

Also, while it might get called, icing is no longer automatic. If the team who is icing the puck touches it first behind the goal line, icing will often be waived off. Unfortunately, this led to a lot of dangerous races to the puck, which led to the no-touch/hybrid icing rule.

This rule means that there is no longer a race to touch the puck, but simply a race to the faceoff dots. If the defender beats the icing team there, an icing infraction is called. If the icing team’s player reaches the dots first, then whoever touches the puck first will determine if a play is icing.

It can be a bit of a confusing rule but was done to still allow competition for the loose puck, but get rid of the hard collisions and checks from behind into the boards. While no-touch/hybrid icing exists in the NHL, several other leagues stick to traditional icing rules.

Icing is a very important rule in hockey, and one that ensures the game isn’t full of teams delaying the game and running the clock out. If you think I missed talking about something important in regards to icing, be sure to leave a comment and let me know!