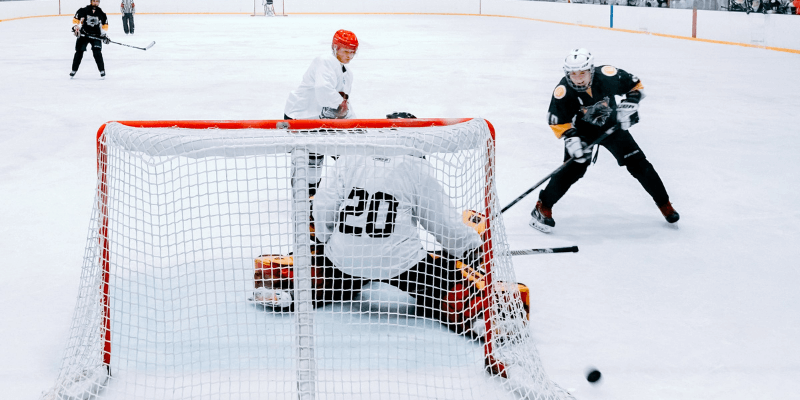 Goals in hockey are incredibly exciting to watch, from the horn, to the lights, to the celebration of the players and fans alike. But every now and then, when a goal is scored, fans will throw hundreds of hats on the ice. This can be a little confusing to new fans.

This act is called a hat trick, and it occurs when a player scores three goals in the same game (not counting a shootout). Once the player nets their third goal of the particular game, hats rain down on the ice in celebration from the fans around the arena.

Keep reading to learn more about what a hat trick is, the history behind hat tricks, and various other stats and tidbits of information about the hat trick.

The Origins of the Hat Trick

The origins of the hat trick are hotly disputed amongst different groups, communities, and individuals. One such belief is that Sammy Taft, a men’s clothing store owner in Toronto, came up with the hat trick.

He made a bet with Chicago Blackhawks winger Alex Kaleta that he would give him a free hat if he scored three goals in a game against the hometown Leafs. This took place way back in January of 1946.

Many believe that after the player won the bet, Taft (along with other brands, hatmakers and stores) continued this tradition to give away a free hat to players who netted three goals in a game.

Other stories include the act being done as a marketing campaign for a new style of fedora in Guelph, and that a men’s clothing dealer in Montreal came up with the idea. While each person has their own idea, the Taft/Kaleta story is the one supported by the Hockey Hall of Fame.

However, while that may have been the first time the term was used in hockey, it was actually around much earlier than that. The term hat trick seemed to first be used in a cricket match way back in 1858.

A player took three consecutive wickets (hit the wooden stake behind the batter three times) and a collection was held, and the money went to buy the player a new hat.

Some believe that this was the beginning of the phrase and it eventually simply made the jump to hockey and other sports. Whatever the origin, hat tricks have been an important part of hockey games for well over half a century and show no signs of going anywhere.

Where do the Hats Go?

A common question many have when it comes to hat tricks is where they all go. Well, that is actually up to the players. When a player scores a hat trick, the team gives them the option to take the hats as a keepsake and memento to remember the impressive feat.

While most players won’t take every hat, they may take a few to remember the occasion. Any hats they don’t take are generally donated or given to a charity of some kind. The hats could be given away, or even sold with the proceeds going to the charities.

Some teams may also offer the ability for fans to come back to the arena and get their hat back, with the ones that aren’t claimed simply being donated to charity. Either way, it’s very good to know that hats simply aren’t thrown away and wasted after they are tossed onto the ice.

What is a Natural Hat Trick?

While you now have a good understanding of what a hat trick is, the traditional hat trick isn’t the only one you may need to know about. There is also the natural hat trick. This occurs when a player scores three straight goals in a game, without anyone else scoring in between.

Scoring three goals is hard enough, but three consecutive goals is even harder. These are certainly more uncommon than a normal hat trick but do still happen from time to time.

What is a Gordie Howe Hat Trick?

Another variation of the hat trick is the Gordie Howe hat trick. This is when a player scores a goal, gets an assist, and gets in a fight, all in one game. It is named after NHL legend Gordie Howe, one of the best hockey players of all time.

Gordie Howe was a great all-around player who was a great scorer, but not afraid of the physical aspect of the game. The name given to this accomplishment makes sense as Howe played a complete game, much like many of the players who get a Gordie Howe hat trick.

This section of the article is going to take a closer look at some interesting facts and tidbits of information about hat tricks in hockey.

How often do they happen in the NHL?

With there being over 1,200 NHL games in a given season, a hat trick will happen in less than 10% of games. So while you might see one in person, you might need to go to a couple of games before getting to participate in one.

Who has the most hat tricks in NHL history?

It should come as no surprise as to who has the most hat tricks in NHL history. The Great One Wayne Gretzky is the proud owner of this record. He has 50 hat tricks and the next closest player (Mario Lemieux) only has 40.

This shouldn’t surprise anyone as Gretzky has scored the most NHL goals in history with 894, which is nearly 100 more than second place, a spot which belongs to Gordie Howe. But if we look at Gordie Howe’s hat tricks, that is where Gretzky is beaten.

However, it is not Howe that holds the record. In fact, he only scored two during his career that spanned multiple decades. The all-time leader in Gordie Howe’s hat tricks is Rick Tocchet, who had 18 during his career.

What was the fastest hat trick ever?

While there have been plenty of quick and impressive hat tricks, such as Brayden Point’s 91-second hat trick from a few years ago, one takes the cake as the fastest. This is the hat trick that Bill Mosienko of the Chicago Blackhawks scored back in 1952.

He scored his hat trick in an unbelievable 21 seconds. So how did he score three goals in such rapid succession? This is because one of the defensemen of the opposing team was playing with a broken foot as the team was undermanned.

Mosienko easily skated the puck around the immobile defender each of the three times and scored goals almost instantly. It is unlikely we will ever see this record broken.

Hat tricks have been scored by all different types of players, including those who are very old and those who are very young. The oldest player to score a hat trick in an NHL game was Jaromir Jagr. He scored one in 2015 when he was 42 years and 322 days old.

On the other hand, the youngest player to score a hat trick was Jordan Staal, back in 2007. He achieved the feat when he was only 18 years and 153 days old.

The hat trick will continue to be one of the most exciting things in not only hockey but also sports as a whole. I hope this guide has helped you learn more about hat tricks, the history of the achievement, and the players that scored many of them.

Are there any other interesting things about hat tricks in hockey that you feel I should have included? If so, let me know in a comment below.