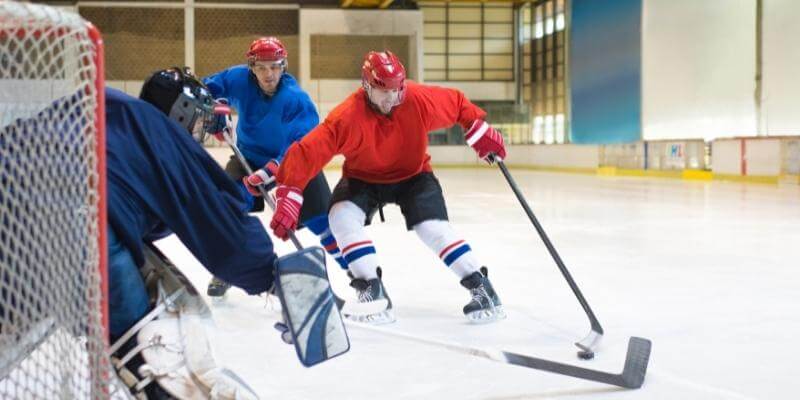 Hockey is a physical sport that involves a lot of body checking, rough play, and contact. It is not for the faint of heart, and you need to be willing to put your body on the line to help your team win the game. Blood, sweat, and tears are par for the course for many hockey players.

However, the sport isn’t a free-for-all. If players get too physical or do things that break rules, they will be penalized. One of these penalties is for cross checking. This guide is going to take a closer look at what cross checking is, how the penalty is called and how the rule is enforced.

What is the Act of Cross Checking?

The act of cross checking is when a player uses the shaft of their stick between two hands to shove or hit another player. It is a rule in the NHL, but also in many other leagues and associations all over the world.

Cross checking can be very painful as a recipient of the hit, as having a hard stick hitting your back, shoulder, chest or even face is not a fun time. It can not only lead to pain, but also the potential for injuries.

Whether this is a hard shot, or just a relatively light one, it is still cross checking. And thankfully, the act is generally quite easy for a ref to spot. The hockey stick is often involved in checks, but a cross check is normally more forceful and high up the back or body than a normal check.

While we are talking about cross checking in ice hockey, it can also be done in lacrosse, field hockey, and other sports where players use a stick of some kind.

How Long is a Penalty for Cross Checking?

A standard cross checking infraction will be a two-minute minor penalty for the offender. But like all penalties, they are up to the discretion of the referee. If a cross check is particularly heinous or recklessly endangers another player, a more serious penalty may be given.

However, in some cases, if a cross check is quite bad, league officials may take a closer look. Extra punishments like fines or suspensions might be for cross checks that are deemed incredibly dangerous or if they were accompanied by malice or intent to injure.

While cross checking has long been a penalty, recently the NHL has said they are going to be cracking down and enforcing the rule more strictly. Beginning in the 2021-22 season, officials are going to be watching more closely for cross checks during games.

Cross checks are commonly called, but they are still often ignored in some situations by refs. See, if the cross checks were small and not delivered with malice, players could often get away with them at times.

We have all seen a player holding the puck in the corner or at the net, only for an opposing player to deliver several (albeit relatively light) cross checks to try and get them off of the puck. This is something that the NHL is trying to get rid of, as it can lead to increased injuries.

The guiding and pushing of an opponent with the shaft of the stick are allowed, but once this becomes more excessive and/or hard, a penalty should be assessed. The NHL is also cracking down on cross checking to promote a better offensive flow in the game.

While cross checking is amongst the most common penalties, it isn’t the only stick-related infraction that players can be penalized for. There are also infractions like high-sticking, hooking, slashing, and spearing.

Spearing is when a player shoves their stick into another player, often in the midsection. While these are generally minor penalties, they can be promoted to double minors, majors, or misconducts/matches if they are deemed excessive or were done with intent to injure.

If there is anything else you think I should have mentioned in this guide about cross checking, don’t hesitate to let me know about it in a comment below!