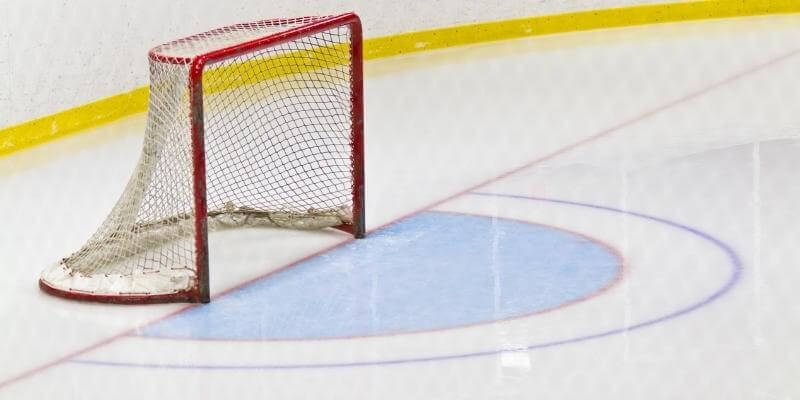 When watching hockey as a new fan, you have likely seen a large blue space in front of each net, and have likely had some questions about what it does and why it is there. That is the crease, and it plays an important role not only for goaltenders but every player on the ice.

Keep reading to learn more about the crease, its history, its size, and the many hockey crease rules that are in place.

What is the Crease and How Large is it?

The crease is painted on the ice in front of both nets and is the area that primarily belongs to the goalie.

It has a couple of different uses throughout the game that are important to be aware of as a fan. First of all, it is a safe and protected zone for goalies.

No player can make contact with the goalie in the crease, or physically inhibit their ability to stop a shot. As long as any part of the goalie’s body, skate, pads, or equipment is in the crease, they are safe from contact, whether intentional or incidental.

It is also a place where a goalie can safely cover and freeze the puck to stop play. This can help give their team a break or stop opponents from scoring off of a rebound. Also, the crease is often used as a reference point for goalies.

By taking a look at the crease, a goalie can make sure they have the right positioning they want on the ice. Without the crease, goalies would often have to look behind or beside them to see where they are in relation to the net.

When it comes to size, the crease on an NHL rink is 8 feet wide, and the semi-circle shape extends six feet out in front of the net at its furthest. It often looks small on TV, but the space is actually quite large when you’re on the ice. It will always be blue, with a red outline.

A History of the Crease in Hockey

While a big blue crease has been normal for hockey fans for around 30 years, it wasn’t always this way. In fact, back when the sport was still in its infancy, the rink featured nothing but a face-off dot and guiding lines for where the net should be placed.

The first crease-like marking that found its way onto NHL rinks was in 1929. This was a small face-off dot in front of each net, and goalies were the only players permitted to stand between this dot and their net.

Next, in 1933, two more dots were placed at the side of each net, and this defined the safe area for each goalie, which measured 8 feet by 5 feet. A full goal crease (a red outline) was first added to the ice in 1934.

It wasn’t until 1986-87 that a round goal crease began to be used. 1991 was the first year that the crease was painted blue to make it easier for everyone to tell where it was. The size of the crease was also changed slightly in the years following, too.

While you know a little about the function of the crease and why it is there, there are many crease-related rules in hockey that are important to know about. As we mentioned earlier, no attacking player is permitted to contact the goalie while they are in the crease.

If they do, they will be given a penalty. A player is free to stand in or skate through the crease, but cannot interfere with the goalie and their ability to save. Defensive players also need to be careful they don’t cover the puck in the crease, or the attacking team will get a penalty shot.

Also, if a fight breaks out somewhere on the ice, goalies are to stay within their crease and not join the fracas. While uncommon, if a puck goes through the crease when shot by an opposing team down the ice, it stops an icing call from being made.

Of course, like essentially every rule in sports, the final call goes to the refs. They’re not perfect and may miss some calls, but everything is left up to their discretion and their thoughts/viewpoints on the play.

As you can see, the crease plays a very important role in hockey and has for a long time. If you feel there are some pieces of crease-related information that I left out, let me know in a comment below!