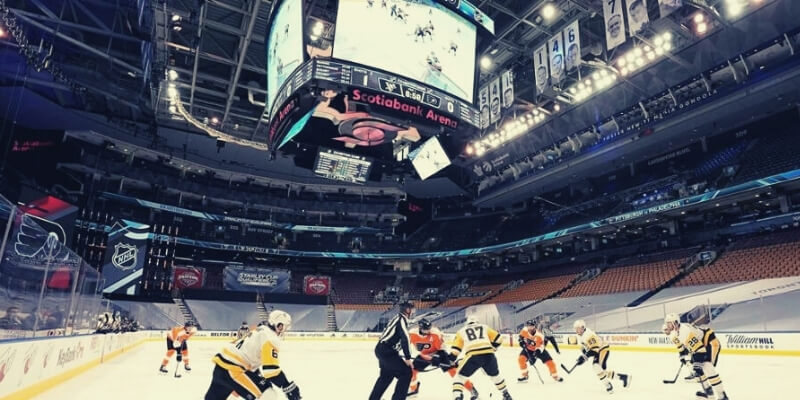 Hockey is an incredibly fast and high-speed game, but there are a couple of breaks during play. There is an intermission between the first and second periods and between the second and third periods, in which play is stopped.

Like many other fans, I will often use this time to get some more snacks, grab another beverage and take a bathroom break to ensure I don’t miss any of the action.

But how long are these intermissions? Well, it can depend on a few things, but in general, hockey intermissions will last between 15 and 17 minutes in the NHL. Of course, the duration can differ in other leagues around the world.

Read on to learn more about the specifics of how long hockey periods will last, as well as what happens during them and why they were implemented in the first place.

How Long Are Hockey Intermissions?

In the NHL, a regular season intermission is 15 minutes and 30 seconds. That is, unless the game is televised. Televised games have intermissions of 17 minutes, instead. This is generally to allow for time for commercials and advertisements.

Prior to resuming play for the next period, referees and teams are given warnings when there are five and two minutes left in the intermission. Also, it is important to know that if an NHL game goes to overtime, there is no intermission before the overtime period.

And if there are multiple overtime periods in a playoff hockey game, the intermissions will usually be around 15 minutes.

While these longer intermissions are standard in the NHL and other leagues, more casual and/or children’s leagues may have a much shorter one, or may not even have intermissions at all.

What Happens During an Intermission?

So what happens during this break in play? Well, there are a variety of things taken care of that are very important for the rest of the game. First of all, a Zamboni will drive along the ice and resurface it.

During a game full of stopping and turning on skates, the ice can get a little torn up. This resurfacing smooths and cleans it and ensures it is optimal for the game. For the teams, they use the intermission to take a little break, regroup, and talk strategy.

As I briefly mentioned earlier, this time is also great for fans to stock up on more food, drinks and go to the bathroom before the next period. Of course, many fans will elect to do these things during play, as they can be very busy during the intermissions.

Many teams will also have some on-ice entertainment for the fans in the arena to keep them entertained. This could be a fan contest, a performance, or even have youth teams play during the intermission. On TV, you will often see quite a few ads during this break in play, as well.

Were There Always Three Periods and Two Intermissions?

While the two intermissions in a game are incredibly normal for most of us who watch hockey today, they weren’t always around. Early on, hockey games were actually played with two 30 minute halves as opposed to three 20 minute periods.

This meant there was only one intermission for the ice to be resurfaced and the players to take a little break. However, in the early 1900s, a change was made and the NHL and many other leagues decided to adopt the three periods instead of two halves.

The main reason this was made was due to ice quality. It became evident that it was much better to resurface the ice and clean it every 20 minutes as opposed to every 30. Before this change, the ice was often a nightmare late into the 30-minute half.

It would be full of grooves, ice chips, skate marks, and various other potential dangers. These often led to players tripping, and players would often get their skate caught which could lead to major injuries.

Also, the buildup of snow on the ice from the stopping and turning led to a lot of issues. This buildup was tough to skate through, and would often stop the puck right in its tracks. This slowed down both the speed and flow of the game, which annoyed both players and fans.

Another benefit of the intermissions proved to be that players got an extra bit of time to rest. This allows them to be more refreshed for the next game and allows them to play a little better and harder as they are not so fatigued.

I hope that the information in this article has helped you understand not only how long hockey intermissions are, but also what goes on during them. Feel free to let me know if I left anything out that you think should be included.