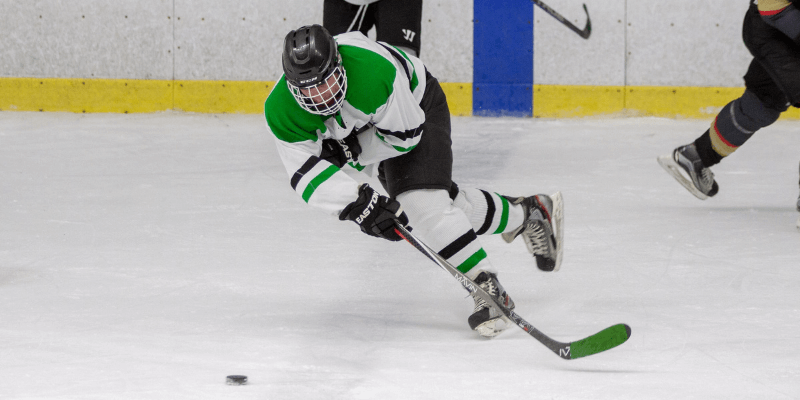 Going to a hockey game or watching one on TV can be a very fun time. These games are fast-paced, action-packed and there is never a dull moment when watching, no matter where you are watching the game.

However, it’s good to know how much of a time commitment you need to make to do so. An ice hockey game in the NHL is made up of three 20-minute periods, for a grand total of 60 minutes of game time for a hockey game.

But like many other sports, it will take far longer in real-time. This is because the clock will stop running for one reason or another. While it varies, most NHL hockey games you go to or watch on TV should take anywhere from 2.5 to 3 hours from start to finish.

Having watched and been a part of hundreds of hockey games throughout my life, the exact length can be impossible to predict before the game. This is for the various different kinds of stoppages that occur during gameplay that take some extra time.

Some are short, while some can add a ton of time to the games. Keep reading to learn a little more about these factors and the different things that have an impact on just how long a hockey game will take.

Other Factors That Influence Real-Time Length of a Hockey Game

But what are these stoppages that lead to a game going from 1 hour in game time to nearly 3 in some cases? The first is the intermissions. This is the time between the end of one period and the start of the next. On average, these intermissions take about 15-17 minutes each.

TV timeouts are another reason why games take longer. These are generally around two minutes long, and take place three times every period. They will occur after 6, 10, and 14 minutes of gameplay. These give teams time to rest, and advertisements are shown.

Of course, serious injuries to players can often lead to long stoppages if medical personnel need to attend to them or if they need to be put on a stretcher or anything. These major injuries are thankfully quite rare, but they do unfortunately happen from time to time.

A game full of penalties, fights, and other rough stuff can be dramatically longer than a clean game with little need for the ref to blow his whistle. When the puck goes out of play, or the pucked is iced, it can also add a minute or so of extra time for the game.

Certain malfunctions like the net coming loose, chips in the ice, or cracks/breaks, or issues with the plexiglass can also lead to games taking longer. If the game is tied at the end of regulation, a 5-minute 3 vs. 3 period will occur and the first team to score wins.

If this doesn’t settle it and decide a winner, the game will go on to a shootout that will decide a winner. This shootout begins with three players from each team participating, but can go longer if no team wins.

As you can see, there are several things that can influence how long (or short) a hockey game is. Some games will hardly have any stoppages and will barely take 2 hours, while others can be loaded with them and take well over 3.

Going to the Game in Person

If you go to the game in person, it will require more of a time investment than we covered in the last section. You will have to drive or take a cab to the game and also sit through things like the warmups and team introductions. These are fun but can add an hour-plus to your experience.

Sure, this can all be skipped and you can arrive right at puck drop, but most people want to get there a little early and enjoy the entire experience of the game. Also, when you leave, there will likely be traffic from the arena that makes your journey home quite lengthy.

While the games you go to in person aren’t any longer than what you watch on TV, you will have to spend more time before and after the game than you would if you simply watch it at home.

The Playoffs Can Change Things

Most of what I have spoken about so far has referred to regular season games and how long to expect them to last. But the length of playoff games can differ. The main reason why playoff games can take longer is because of how the overtime period works in the NHL.

Games Outside of the NHL

While you should be now fully educated on how long an NHL game lasts, what about other types of hockey games? How long will children’s hockey games, recreational hockey games, college games, or international games last?

Again, it varies, but children’s and recreational games generally only run for 60 minutes. These games have the same period length (or might do two halves at 30 minutes each) but are played at runtime. This is when the clock will always run, even when there is a whistle and stoppage.

As you could imagine, this can dramatically shorten the length of a game, and there is not a lot of waiting or wasted time during these games.

When it comes to college or junior hockey games, these will use stoppage time like the pros, so they will take around 2.5 hours. However, they feature less production and potentially less TV timeouts, so are closer to 2-2.5 hours when compared to the 3 that an NHL game will take.

But when it comes to most international games and European leagues, the timing is around the same. The games consist of three 20-minute periods, with similar stops for intermissions, penalties, and the other stoppages mentioned earlier.

As you can see, the average NHL game will take around 2.5 to 3 hours to watch from the first puck drop to the final seconds. It can vary, but this is about how much time you should expect to spend watching or going to a game.

Can you think of anything else that might have a role or dictate how long ice hockey games are? If so, let me know in a comment below.