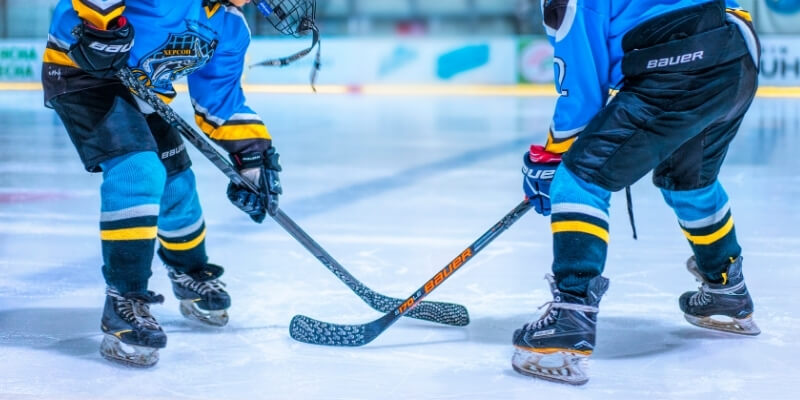 Without hockey sticks, this beautiful sport simply could not be played. It assists players in everything from scoring, to passing, to playing defense, to maintaining balance and so many other things.

Choosing the right stick can provide that small boost that you need to truly be the best player you can be. While having the right flex and kick point are certainly crucial, the most important aspect of a stick is its size.

There are plenty of sizes available, but sometimes, that perfect stick for you may not be out there. Thankfully, in that case, you can cut the hockey stick down to size to ensure it works well for your needs.

Keep reading to learn more about how to best cut a hockey stick and the many ways it can change your stick as you know it.

The Proper Way to Cut a Stick

So what is the process like for cutting a hockey stick? Well, it is quite simple and can often be done in under 30 minutes. The first thing to do is to put your skates on and hold your stick out in front of you, blade down.

When held up straight, the right size for a stick will have the butt end of the stick somewhere between your nose or chin. Mark that spot on your stick with a permanent marker, and this will be where the stick is cut.

Once you have marked the spot, you need to safely cut the stick down to the right size. This can often be done with a hacksaw, and always be sure to keep the stick steady and secure when cutting it to prevent the possibility of accidents. Be sure to get a clean cut all the way through.

Of course, always be careful when controlling anything sharp and avoid any potential distraction. If you aren’t confident working with a power tool or saw capable of cutting through the stick, many pro shops and sporting goods stores may be able to cut it for you.

Once the cutting is done, consider filing down the edges of the area of the stick that was cut to ensure they aren’t overly sharp. Then, the stick can be taped and used as normal.

The Importance of the Right-Sized Stick

As briefly touched on earlier, playing with a stick that is the right size for you can be critical to your success on the ice. The right-sized stick allows you to play comfortably and not inhibit your movement or passing/shooting.

If you try to learn hockey with a stick that is too large, it can teach you poor mechanics for everything from shooting to stickhandling. It can ruin a player’s confidence and make them think they are struggling when it is the fault of the stick.

I speak from experience as I, like many other children, started with a stick that wasn’t quite right for me in terms of size, and was difficult to use at times.

Older and more experienced players can play with any stick but are likely to see the best results with one that is properly sized, too. It simply feels more natural to play with a stick that is always where you want and expect it to be.

However, this doesn’t mean every player needs this stick height to be exact. Some players prefer a shorter stick and others prefer a longer one, and this can work in some cases. A shorter stick is often better for players whose focus is on scoring, passing, and stickhandling.

On the other hand, a longer stick is often preferred by defenders. The main reason for this is because this extra length helps with poke checks, allows for easier interceptions of the puck, and can allow for harder slap shots from the blue line.

Will Cutting My Stick Change It in Other Ways?

While the cutting of a stick will change the size of the length of the stick, is that the only thing that will be impacted? The answer is no, as cutting a stick can impact the stick in several other ways, which all need to be considered before deciding to cut.

First of all, cutting the stick will often change the flex. The shorter you cut a stick, the less flex it will have and the stiffer it will be. Also, cutting a stick may change the kick point and flex point, which can have an impact on the accuracy and power of your passes and shots.

Also, if you are used to a certain size of the stick, it may feel a little strange to play with a shorter one. This will go away with time, but it is good to practice with your recently-cut stick before playing with it in an actual game.

I hope this guide has been able to help you learn not only how to cut a hockey stick, but also the importance of doing so. If I missed anything that you feel could have contributed more to this guide, feel free to let me know in a comment below!