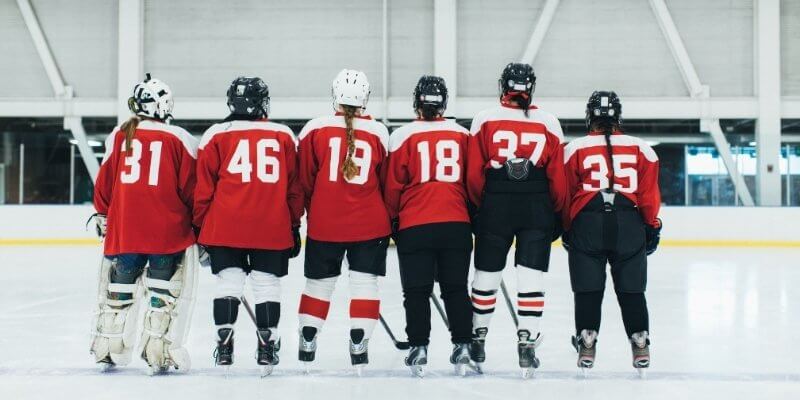 While many NHL teams would likely love to have a giant roster full of players so they always have fresh bodies, this isn’t allowed. In fact, the NHL has very strict rules on roster size limits that every team needs to adhere to? So how many players are allowed on an NHL roster?

Six players are on the ice for each team at full strength (normally 3 forwards, two defensemen, and a goalie), but a team has many more than that on the bench and even a few more in the stands.

Throughout most of the regular season, a team can roster 20-23 players. However, the roster rules get a little more confusing than that. The reason for this is because the roster size actually expands and changes during the season, and there are other rules to know.

Keep reading if you want to learn all about how NHL rosters work and how many players a team can have.

To truly understand how many players can be on an NHL hockey team, there are four different general roster limits imposed by the league that you need to familiarize yourself with. First of all, there is a 20 player limit for games.

No team can dress more than 20 players for a game. This is generally made up of 12 forwards, 6 defensemen, and 2 goalies. Next, there is the 23 player limit that we briefly mentioned earlier. This is the maximum allowed on an NHL roster for most of the regular season.

The players that are on the roster, but not dressed for the game are known as healthy scratches. In the entire organization, a hockey team has a 50 player limit. This counts for both the professional team and the minor league team.

While the minor leaguers have no impact on the 23 player limit a team has, they do impact the 50 player limit. Players from the minors can be called up and professionals can be sent down, but a team must remain under that limit.

Lastly, there is a reserve list that features a 90 player limit. This is the limit of players that can be attached to an organization. This includes their professional and minor league roster, but also any unsigned players in junior leagues or players that the team has rights to.

While this all should be relatively clear, injuries can often throw a wrench in the plans of teams all across the league. If a player is hurt and needs to sit out of some games, a team may elect to put them on the injured reserve.

The injured reserve is a place where teams can put players that are physically unable to play for one reason or another. Once a player is put onto the injured reserve, they no longer count as a roster spot until they are removed. This allows a team to call up a player from the minors.

The Rules Change After The Trade Deadline

Now, this doesn’t mean teams can sign and play whoever they want, as there is still a salary cap that they must stay at or under. Also, many teams will remain at the 22 or 23 players even if they could have more, as that is what is normal throughout most of the season.

Also, it is important to know that while players can be signed after the trade deadline to join a team, they will be unable to play in the playoffs according to the rules.

There is also no roster limit in the playoffs, but anyone who plays on your team had to be on your team prior to the trade deadline, or you had to own their rights.

Why Would Any Team Carry Less Than 23 Players?

So now that you know that an NHL team can officially have 23 players for most of the season, you may be surprised to learn that teams will sometimes opt to instead keep only 21 or 22. The main reason for this is due to the salary cap.

Every team in the NHL needs to comply with a salary cap. All total annual salaries of your players need to come under the total cap. This changes each season, and during the most recent NHL season, the cap was $81.5 million.

If a team starts to add too many players, this can cause their salary cap to skyrocket. While that is a lot of money, with many stars making anywhere from $7-10 million annually (or more), it may not go as far as you think.

Going with less than the 23 also gives them more flexibility if they want to add a player or trade for a player, without having to put in the extra effort to make space within their roster.

How Do Teams Choose Who to Keep?

With so few roster spots and so many talented players all over the world, how do teams select who to keep and who to let go or send down to the minors? Well, there are a lot of potential factors here. It often has to do with their position, their skills, their fit on, and their contract.

A team needs an adequate amount of players for each position. So even if there is a promising left winger, if you already have your four left wingers for your active NHL roster, it doesn’t make sense to keep another and be short-handed at another position.

Team fit is also a crucial aspect of hockey. It is the ultimate team sport and even if a player is great, if he doesn’t gel well with the rest of the team, he could be shipped out.

Different Rules for The 2021 Season

While these are the rules for most NHL seasons, the recent 2021 season had rules that were a little different due to the Covid-19 pandemic. The teams not only allowed their 23 players but were also allowed a taxi squad of four to six players.

This was to help teams keep themselves on the ice, as the league anticipated some teams having players who would need to be held out of games due to Covid-19 itself or precautions surrounding the pandemic.

These taxi squads were made up of players who cleared waivers and would travel with the team as extra emergency players if others needed to be held out. These players didn’t count against the roster, and these taxi squads sort of operating like a minor league team.

I hope this guide has been able to learn more about how many players an NHL team can have. Do you have any additional questions about rosters in the NHL or feel there was something else I should have included? If so, don’t hesitate to let me know in a comment.