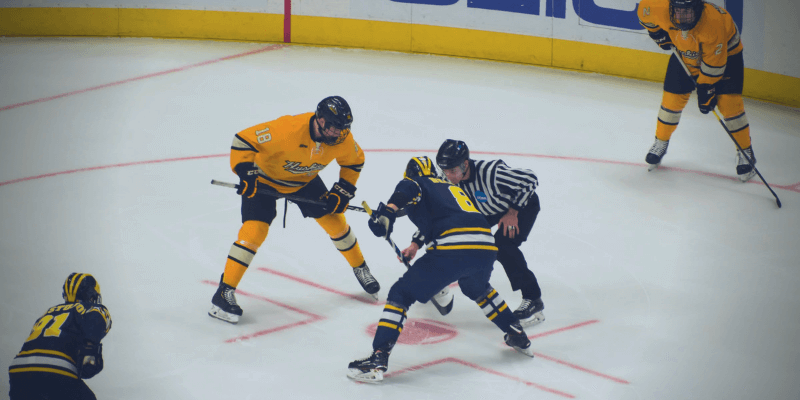 Every sport has a different rule when it comes to how the actual game is structured. While some sports will have quarters, innings, rounds, or halves, hockey is different. Each game is made up of periods to signify how far along in the game we are.

But how many periods are there in an ice hockey game? In the NHL, and other professional, high-level and international leagues around the world, hockey games feature three periods of play.

Each period is 20 minutes long, which means a standard ice hockey game is 60 minutes long. If the game is tied, additional overtime periods (or a shootout) might take place.

However, that doesn’t tell the whole story. Keep reading to learn all you need to know about the periods of ice hockey, how they work, and how long hockey has been played this way.

Has Hockey Always had Three Periods?

For most of us, we have only known hockey with three periods of play, like it is today. However, this wasn’t actually how hockey was always played. During the early days of the sport, the game was played with two 30-minute halves with a single intermission between them.

However, that all changed back in 1910 thanks to Lester and Frank Patrick, players who made several crucial innovations and suggestions for rule changes in hockey.

Back in the day, 30 minutes of continuous play often wreaked havoc on the ice, and made it virtually unskatable in some areas. Skate marks, holes, and snow were common throughout the ice and often interrupted play and could potentially injure players.

So the Patricks recommended that another intermission was added to the game to give the crew another chance to clean off and repair the ice.

In addition to this being great for the ice and the quality of the game, this extra break was also well-received by players who had much more energy as a result.

What Else Happens In Between Periods?

Fans will often use that time to go and order from the concession, use the bathroom or even go and visit with other fans across the arena.

Many arenas will even have on-ice entertainment between the periods to keep fans engaged, excited and cheering during the brief pause in gameplay. This could be children playing games, a fan contest or a variety of other things.

The time for each intermission can vary slightly, but will often be around 15-17 minutes. This gives everyone a nice little break, and allows the zamboni and rest of the cleaning team a chance to fix up the ice to ensure the game can be played as best as possible.

While most games will end with a winner after the three periods of play, this isn’t always the case. If a game is tied at the end of regulation, the game goes into overtime.

During the regular season, overtime is a five-minute sudden-death period in which each team has three players and a goalie on the ice. The first team to score in this period will win the game. It is important to note that there is no intermission between the end of the third period and the start of overtime.

If no team is able to score the go-ahead goal in overtime, the teams will then move onto a shootout to decide the winner. However, the rules are different in the playoffs. If there is no victor after the first overtime period, the game doesn’t go to a shootout.

The game simply goes into another overtime. Eventually, one of the two teams will score the winning goal and earn the victory.

In overtime during the playoffs, each sudden-death overtime period is the standard 20 minutes in length. While most games that reach overtime will end within the first overtime, some games have lasted much longer than that.

In fact, the longest NHL game saw almost six full periods of overtime before the Detroit Red Wings scored the winning goal over the Montreal Maroons back on March 24th, 1936.

How Long Does a Period Take in Real Time?

So now you know that an NHL period lasts about 20 minutes, this is in stop time. This means that in real time, the period will often go much longer. Having been to and played in my fair share of hockey games, I can tell you that not all periods are the same length in real time.

Some may pass very quickly due to very few stoppages in play, while others might lag on and on due to penalties, injuries, offsides, and other occurrences. In most cases, these periods will take around 40 minutes each.

This can turn a 60-minute game of hockey into one that will generally go around 2.5 hours. So if you go to a game and plan on each period being over in a cool 20 minutes, you are likely to be disappointed.

Of course, this goes for professional league and international games. Some children’s or recreational games may operate on runtime, which means that any stoppages (such as penalties, offsides, or icing) won’t result in the clock stopping.

These periods will end up being exactly as long as they are advertised, for a more predictable time commitment for players and spectators alike.

Now that you know just about everything there is to know about the periods of a hockey game and what goes on between them, I figured we might as well look at some period-specific NHL records and stats.

Want to know who has scored the most points in a single period? What about which team has scored more goals in a period? Keep reading to learn about these stats and many others.

Which NHL player holds the record for the most points in a single period?

No player has scored more points in a single NHL period than the legendary Bryan Trottier. In 1978, he scored 6 points in the 2nd period in a game against the New York Rangers. He scored 3 goals during the period and added 3 assists.

Which NHL team had the most goals in a single period?

Back in early 1981, the Buffalo Sabres set an NHL record that still stands to this day by scoring 9 goals in the 2nd period of an NHL game. Considering that the average team only scores about 3 goals a game, the fact that they got 9 in a single period is incredible.

Also, their opponents (the Toronto Maple Leafs) scored 3 in the period, and their combined 12 goals are the most scored ever in a period of an NHL game.

Which NHL game had the most penalty minutes in a single period?

The record for the most penalty minutes in a single period was in the 3rd period of a game in 2004 between the Philadelphia Flyers and the Ottawa Senators. There were a total of 409 penalty minutes handed out in the period.

This was more than the previous record for an entire game, which was 406. The period had 61 penalties handed out in total. The entire game as a whole had 419 penalty minutes, which is the current record.

I hope this guide has helped you learn a little more about the periods of an ice hockey game and how they work. If there are any more tidbits of information that you feel I should have included, don’t hesitate to leave me a comment below!